When I first launched my blog in March, you may remember me writing about a blog post entitled “IMAX Hubble 3D & The James Webb Space Telescope.” The new telescope will serve as Hubble’s replacement once it’s launched in 2014 on top of an Ariane 5 rocket. The main problem with the James Webb Space Telescope is that is going to be over 900,000 miles from Earth, so if it breaks we cannot just send a team of astronauts up to fix it, as we have done with Hubble in the past. Knowing that the JWST will be orbiting in the Lagrange point, we know that the dangers of space lurk at literally every moment of operation.

To combat the extreme temperatures of space, NASA tasked a team of Goddard engineers to create the chassis which could survive both the launch as well as the dangers of outer space. The chassis of the telescope—called the Integrated Science Instrument Module—holds all of the delicate instruments and would generally serve as the structural heart. NASA’s Goddard team had to find a material that would be suitable for the job. Well, guess what—there wasn’t one. Through a variety of different tests, the team decided that it needed to invent a brand-new composite material by using a combination of fiber/cyanate-ester resin. 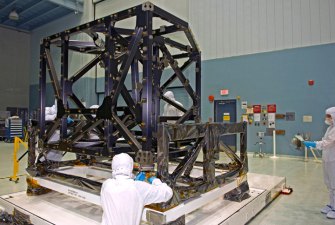 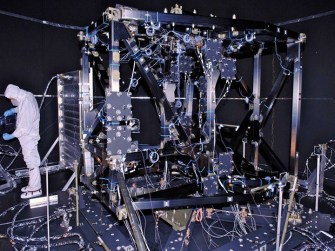 They are calling their new composite material “unobtainium.” Since the late 1950’s, aerospace engineers have used the term “unobtainium” when referring to unusual, very costly or UN-obtainable materials. The name unobtainium may even sound familiar but you can’t quite place the reference. Yes, you guessed it; It’s the highly valuable ($20 million a kilo) room-temperature superconductive mineral with an atomic number of 120 found on James Cameron’s famed moon, Pandora, in the 2009 movie “Avatar.” Image of Pandora’s Unobtainium below.

The new material that NASA created survived a gruesome 26 days of repeated cycles of testing, and passed with flying colors. The structure shrank as expected, by about the width of a needle when temperatures reached around -411 degrees Fahrenheit. Needless to say, the testing proved that the material far exceeded the design requirement of about 500 microns. This isn’t the only thing they the team invented to suit their needs. They also had to determine a feasible way to assemble all of the chassis’s 900 components together. For this process, they ended up using several methods including nickel-alloy fittings, clips and specially designed composite plates joined with a form of adhesive that they invented as well. 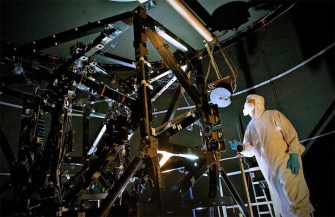 NASA now has two webcams in the Building 29 cleanroom at Goddard, one showing the left side and one showing the right. The photos are updated every minute but allows you to watch the development of the telescope.

Needless to say, this was a major step in the development of the telescope which we will send on its way in a few years. The telescope is a major subject of conversation in science circles and everyone is excited to start looking at the loads of data and images it will be sending back to Earth. NASA’s Web site puts it best by saying “The JWST will be the premier observatory of the next decade, serving thousands of astronomers worldwide. It will study every phase in the history of our Universe, ranging from the first luminous glows after the Big Bang, to the formation of the solar systems capable of supporting life on planets like Earth, to the evolution of our own Solar System.” 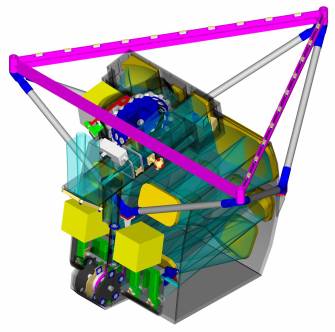 We will of course have to wait a few years before it starts snapping photos and capturing data but I think that the wait will be worth it!

Barnes & Noble’s Pubit! About To Launch

I got an email yesterday from Pubit!, a new service that will allow writers to publish their own ebooks and offer them for sale on Barnes & Noble’s website, announcing […]