A year ago, Ronald Shaich, the founder of Panera Bread, one of the biggest restaurant chains in the States, decided to try something different. He opened the Panera Cares Community Café in Colorado, an establishment that looked like and sold the same things as all the rest of the Panera Breads out there. With only one difference – the lack of a cashier. Instead there was a donation box where customers could deposit more or less than the suggested donation for each item. Or not pay for it at all.

Now, everyone who says there is no such thing as free lunch should take note because it turns out that you can, indeed, have your cake and eat it too. One year later Panera Cares Community Café is thriving and there already are two more restaurants. Schaich says that about 20% of the customers pay less than the suggested donation and about 20% pay more. What’s more awesome is that some of the people who can’t afford to pay at all, decide to do volunteer work, thus decreasing the restaurant’s expenses. 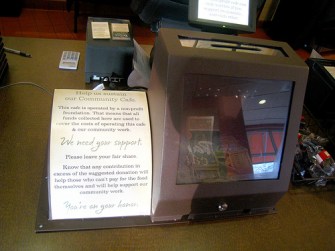 Shaich shows us that companies’ business models shouldn’t be impervious to innovation and experimentation. Shaich researched many pay-as-you-want models before starting his, focusing on community cafés that often operate from the back of a church. He wanted to give customers the full value of the Panera Bread experience and decided that diverse communities would be the best fit for his plan, with both higher and lower income residents. Another important detail was to have donations boxes instead of cashiers so that no one feels embarrassed for not being able to pay the full price.

Shaich’s plan is to open one Community Café each quarter from now on. Turns out people are not constantly looking for ways to cheat the system, especially when the system is built on having trust in them.

As I tracked with several colleagues in a 2009 paper, climate change-related health impacts such as extreme heat, disease, and respiratory problems, and more vivid threats such as hurricanes have received relatively […]