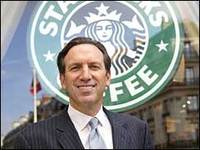 The return of Howard Schultz to Starbucks in the CEO role — combined with the deluge of press attention about the looming showdown between McDonald’s and Starbucks for the hearts and minds of coffee drinkers around the world — raises a very interesting question: To what extent can the founder of a company spark a turnaround by returning to the CEO role? It seems like a knee-jerk reaction at many companies to reinstate the founder as CEO in times of need: there’s not only Howard Schultz at Starbucks, but Jerry Yang at Yahoo, Michael Dell at Dell, Steve Jobs at Apple, Charles Schwab at Charles Schwab, and Ted Waitt at Gateway. The basic logic, of course, is that the original founder of the company is an “innovative visionary” capable of righting what ails the company and restoring investor confidence in the strategic direction of the company.

With the exception of Jobs at Apple, however, these founders have produced mixed results thus far in their turnaround bids.  Pink notebook PCs at Dell and “Talk to Chuck” ad campaigns at Charles Schwab are nice, but how much do they really add to the bottom line? Anyway, investors were upbeat about Schultz’s return, driving Starbucks stock 8% higher on the news. Is this a quick hit or part of a long-term turnaround at the company?

Influx Insights seems to think the burden of proof is with McDonald’s, but I think the burden of proof is really on Starbucks. The company’s international expansion plans – in places like Russia and China – are not going as well as they should be, and the company is GAP-ifying itself with a Starbucks on seemingly every corner. On the other hand, McDonald’s has mastered the game of international expansion (its store in Pushkin Square in Moscow is still legendary), while the company has proven proficient in thinking up innovative new food concepts (Chipotle Mexican Grill – one of the hottest Mexican food chains in the USA – is a McDonald’s spin-off) to drive top-line revenue growth.