After fuseproject’s sleek WattStation electric vehicle charging stations for GE, Nissan enters the designer charging station market with Solar Tree – a futuristic solar-powered vehicle charging station. The 40-foot concept is being exhibited at this week’s CEATEC 2010 trade show in Chiba, Japan, and consists of three round translucent solar panels that follow the sun across the sky, a biomimetic design inspired by sunflowers. A wireless charging pad in the shape of a clover leaf sits at the base of each station, recharging the batteries from a short distance without any plugs or cords. 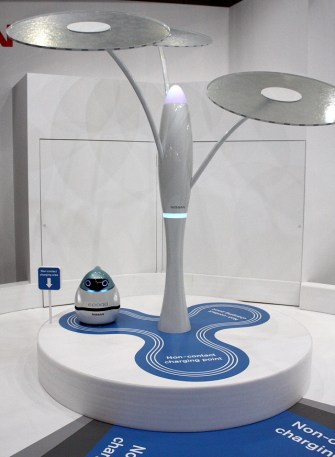 Besides vehicle charging, a forest of 1,000 Solar Trees can power up to 7,000 households and offer heat protection during the summer with UV filters in the translucent solar panels and a micro-mist spraying system on the outer edges of the panels.

Solar Tree and its companion, the EPORO robot car, offer an estimated conversion efficiency of 30% based on the stations alone and an additional recharging option in the form of charging lanes on the road that would power the EPORO wirelessly.

Though Solar Tree is still a highly futuristic concept, if Nissan’s track record in robotics innovation is any indication – they did, after all, create the first commercially successful humanoid robot, ASIMO – we can expect to see Solar Trees in the cities of the not-so-distant future.

It is a phrase more often heard in London than Washington, but which has driven British defence policy since the end of the Suez crisis in 1956. It is that […]