For the people of Iceland, the past few years must feel like the old saying “when it rains, it pours’: we’ve seen two significant eruptions, one at Eyjafjallajökull and one at Grimsvötn, in less than a year. Earlier this week, there was news that another Icelandic volcano, Hekla, was showing signs of unrest, although it was unclear whether they pointed towards an eruption. Then, the switcheroo, where instead of anything at Hekla, we get a surprise jokulhlaup (glacial outburst flood) at Katla on the southern end of the island.

Earlier today, Katla produced a small glacial flood (a jokulhlaup) that closed the Ring Road around Iceland. The scientists monitoring the events called it a very small event, possibly only a phreatic explosion under the ice that generated the meltwater. However, no one was hurt and there is little danger for tourists right now from the event.

The jokulhlaup from Katla was fairly small and as of right now there are no clear external signs that the flood was caused by an eruption of volcano. Remember, Katla is covered by a large ice sheet (Myrdalsjökull), so any heating of the glacier from underneath could cause meltwater to build up until it is catastrophically released. There are some circumstantial clues that this could be the result of a very small eruption – first off, Jon Frimann has been tracking the increase in harmonic tremor, an indicator of magma moving in conduits, under Katla. Secondly, there are sightings of cracks in the glacier at Katla (top left), any suggesting a large thermal input under the ice to create weakness in the cap. However, there has been no evidence of eruptive material such as lava or ash, so it is still only conjecture that this flood was caused by an eruption under Myrdaljökull. 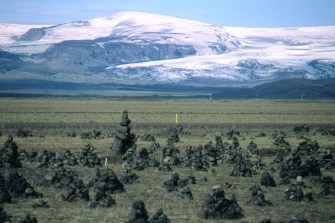 An undated image of Katla showing its low, broad profile and the Myrdaljökull icecap.

With this hiccup at Katla, I’m sure the “disaster mongering” will start to ramp up into a frenzy with people expecting a giant eruption from the volcano. Knowing this, Dr. Freysteinn Sigmundsson even said “At least this is not a large eruption, the Katla eruption people have been waiting for.” Katla hasn’t erupted since 1918, although there have been events – in 1955 and 1999 – that may have been small eruptive events. When Katla does decide to not hide its eruptive activity, we are likely to expect something fairly large, in the VEI 3-5 scale. However, at this point, this is no indication that Katla is headed towards a major eruption.

If Katla does show signs of a new eruption, there is currently at least one webcam pointed at the volcano – but I’m sure this event will prompt a flurry of new webcams in the near future, so if you find one, post the link here. The Icelandic Met Office also has realtime tremor and GPS information (check out stations GOLA, HVOL and THEY) at Katla, although you have to know where the volcano is located to click on the right station.

In any case, these events at Katla mean we should keep a close eye on the volcano in the coming weeks to months to see if this was another transitory event like the jokulhlaup of 1999 or possibly a sign of things to come. (Oh yes, and I’d like to thank Katla for adding to the cavalcade of volcanoes this year that decide to make noise on the weekend).

{Special thanks to all the Eruptions readers who provided some of the links in this post.}

Top left: The cracking and sagging in the ice cap on Katla after a small jokulhlaup on July 9, 2011.

On August 2nd, the U.S. Government’s Doomsday Machine is scheduled to be triggered automatically, bringing with it unspeakable economic calamity. The financial markets will freeze up, foreigners will stop financing […]