Classes starting today, so I have to be brief: 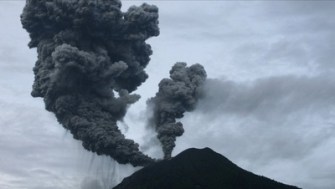 The Indonesian volcano continues to experience explosions, which one last night (well, last night here in Ohio) that prompted an ash advisory for aircraft up to 6,100 m / 20,000 feet, although most reports I’ve seen pegged the ash column at closer to 2,000 m / ~6,500 feet. Eruptions readers have found a bevy of links for footage and information about the eruption, including a remarkable image gallery from the BBC that shows the volcano exhibiting two ash plumes – one that is vertical, one that is shooting off to one side (see above). This definitely makes it seem that the vent is partially blocked and these explosions are helping “clear the throat” of the volcano (NOTE: this does NOT mean I think something big is going to happen, rather just that it seems to be the reasonable explanation for the bifurcation of the plume). My hunch is that even now, very little “new” juvenile magma has been erupted from Sinabung, but that is pure speculation until there are any analyses of the ash shard morphology or composition.

There is also some video from Portuguese television Some of the most recent images from the volcano show a strong, single plume with some rock avalanches (possible block and ash flows) on the flanks. Evacuations have increased to over 21,000 people living near the volcano and some flights have been diverted due to the taller ash plume. The biggest threat right now is the ash fall from the explosions and as such, the government is providing face masks and moving people to sturdier shelter. The Etna

Not to be forgotten, Etna continues to show signs that it is entering a new cycle of eruptive activity as well (albeit much less of a surprise than Sinabung). Dr. Boris Behncke points us to some new updates from the INGV (italian – top and english – bottom) that describe the explosions and collapses that have been producing the ash fall on Sicily. Be sure to check out Dr. Behncke’s Photostream for the latest and greatest images of the current activity at Etna – currently he has some close ups of the explosions occurring in the Bocca Nuova crater (not to be missed). You can always watch Etna’s show on the multitude of webcams as well.

New eruption at Sinabung in Indonesia

Potentially the first eruption in 400 years at Sinabung in Indonesia has prompted the evacuation of thousands on the island of Sumatra.