As a result of the economic downturn and the cancellation of the Constellation program, it’s now Shuttle Endeavor’s turn to take it’s last voyage into space. After a postponement of the launch, Endeavor’s thrusters will burn into the concrete of Pad 39A for it’s 25th and final flight on Monday and will be viewed by crowds in record numbers at Kennedy Space Center in Cape Canaveral, Fla. The sheer number of spectators is massive with low estimates ranging in the 200-250k number all the way up to just shy of a million. Press releases are stating that hotels have been sold out for weeks, restaurants have been doubling up on their food supplies and local residents have even been renting out bedrooms in their homes.

Despite the postponement, President Obama, the first lady and their two daughters will still be visiting Cape Canaveral today, and the excitement on Florida’s eastern coast has been palpable: as early as Wednesday morning began pitching tents along the Indian River. The event from an overall standpoint is estimated to bring in over $10 million dollars and certainly going to provide a bit of a boost for the county.

A good number of people camping out to view the launch have no idea ofthe actual mission nor even care. Their goal is to watch the show and head home afterward. Most people aren’t aware that Endeavor is carrying the most expensive piece of scientific equipment a shuttle has ever carried in it‘s cargo bay. This piece of scientific equipment weighs about 7-tons, costs about $2 billion and was 17 years in the making. Nobel prize-winning physicist, Samuel C.C. Ting spent the last 17 years of his career developing the $2 billion particle accelerator with one goal in mind: “Track and Study Cosmic Rays in Outer Space with Unprecedented Sensitivity.” Ting’s goal is to not only find out what the origin of the universe is but to find out what it’s made of.

Ting’s particle accelerator is known as the AMS or Alpha Magnetic Spectrometer. The AMS will eventually be installed on the International Space Station and will explore the Universe for a period of over ten years. The AMS is designed to capture space particles such as dark matter and anti-matter which we still know very little about. Assembled at the CERN physics research center, scientists have hopes that charged cosmic rays observed by the AMS will be able to bring dark matter into an observable light. As the Earth’s atmosphere is designed to shield us from cosmic rays, it’s difficult for us to observe them the way that we would like to so the AMS operating in space will be the most ideal method for us. Mother Nature hits us with these cosmic rays all the time but we are unable to study them here on Earth in a manner like that in space. Scientists at the Large Hadron Collider are quite excited of the data the AMS hopes to provide. The director general of CERN states that “This is a very exciting moment for basic science” and “we expect interesting complementarities between the AMS and LHC. They look at similar questions from different angles, giving us parallel ways of addressing some of the universe’s mysteries.” 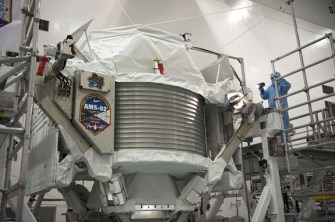 In retrospect, we don’t know much of anything about the mysterious dark matter and energy that makes up most of our Universe. The true understanding of it is absolutely fundamental to how we view the Universe and how it works. Its invisible presence is everywhere, and although we’ve not directly proven the existence of dark matter, the evidence says otherwise. Although only indirectly observed, devices like the AMS and LHC will possibly someday help put the pieces together in this dark puzzle and shed a bit of light on why the Universe operates the way that it does.

We now have the tools and know-how to not only develop machines to possibly observe dark matter but also precise enough instruments to possibly even capture particles of dark matter. Science has thrown billions of dollars developing such machines as the LHC and now the much smaller AMS. Let’s hope that this race to discovery will turn up some of these dark matter particles and provide some of the missing pieces we’ve been searching for. Until then…

Miller-McCune Magazine on the Climate Shift Report: How Ideology Colors Our Perceptions

At Miller-McCune magazine, Emily Badger discusses  several key themes of the Climate Shift report, focusing on how the reaction from several bloggers connects to the findings of Chapter 4.  The full article is worth a […]