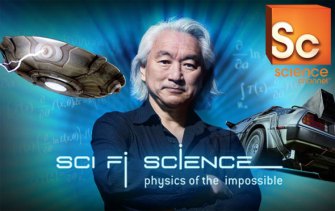 I am proud to announce that the second season of “Sci Fi Science: Physics of the Impossible,” debuts next Wednesday, Sept. 1, at 9 pm, on the Science Channel (check your local listings for details). It was a pleasure working for six months with the Science Channel to produce 12 exciting episodes that I am sure will fascinate and educate the audience. Here are a sample of the new technologies and fantastic sci-fi concepts we explore in the second season: ** Terraforming Mars. Within this century, will it be possible to turn this barren planet into a new Garden of Eden? We interview some of the world’s top scientists who think so.

** Exploring the Galaxy. In the distant future, how can humanity possibly explore a galaxy with 100 billion stars which is 100,000 light years wide? We explore cutting-edge ideas how this seemingly impossible feat might be accomplished

** Alien Invasions. What happens if the Earth is invaded by hostile aliens? Hollywood gives us totally unrealistic scenarios of how we will defeat a hypothetical invading force that might be thousands of years ahead of us. So how do scientists believe we will confront this threat?

** Robot Domination. What happens if robots take over the world? Science fiction writers love to describe what happens when the robots finally become smarter than us, and possibly take over. But what do the experts in artificial intelligence believe? How do they think we will face this crisis?

** “Star Trek”-Style Holodecks.  At first, physicists shook their heads when the holodeck was first introduced by the “Star Trek: Next Generation” series. It seemed impossible to create an imaginary world which appears totally realistic. Yet we interview the scientists who laying the scientific groundwork of a real holodeck.

** Building a Transformer. Kids love to play with Transformer toys, yet we investigate research which might make possible something even more advanced: shape-shifting.

These are just a sample of the exciting episodes that will unfold over the next 12 weeks on the Science Channel!

Find out when to watch