According to a new study by scientists at the Astromaterials Research Science Directorate at NASA’s Johnson Space Center, “Mud volcanoes themselves are an indicator of a fluid-rich subsurface, and they bring up material from relatively deep parts of the subsurface that we might not have a chance to see otherwise.” The scientists used photography equipment from the Mars Reconnaissance Orbiter to examine the structure of some of these mounds and their flow-like features. They are convinced that there is a possibility that the mounds were caused by other processes (see last image). They believe that these features “occur elsewhere in the northern plains of Mars, were good places to search for signs of life.” As you may or may not know, one of the main goals of the two Mars Rovers (Spirit and Opportunity) was to determine whether life ever arose on Mars. As the NASA Web site states: “From the tiniest bacterium to the largest tree, all life as we know it requires water. Though we don’t yet know if life ever existed on Mars, within weeks of arriving, NASA’s Mars Exploration Rover Opportunity discovered that the plains of the Meridian surface were once a water-soaked place.”

Liquid Water—Can We Find It on Mars?

Detectives sometimes say “Follow the money when you want to crack a case.” Scientists, by contrast, say “Follow the water.” Water is plentiful throughout the Universe, mainly in the form of ice—but liquid water is both rare and precious. In our solar system for example, liquid water is only found in large quantities here on Earth and perhaps on a moon of Jupiter, under its ice cover.

You may have heard the saying liquid water is “The Universal Solvent”. It is in some sense the amniotic fluid of life, it can dissolve most minerals and chemicals besides certain oils and non-soluble compounds and it also serves as the mixing bowl for organic chemistry. Carbon has four bonds and because of that we can create chains of carbon atoms, sometimes called hydro-carbons, out of which you can form amino acids and proteins. So, in other words, where we find liquid water we have the tantalizing possibility of finding, eventually, DNA.

Looking at photographs of its geological structure, we know that Mars once had flowing water. We see remnants of evidence of an ocean bed perhaps the size of the United States. We see river beds, especially river beds (image below) that have emanated from craters. We also know that there is water on Mars however in the form of ice at the poles and also in the permafrost underneath the Martian surface.

Well, if Mars once had these great oceans and lakes and streams, what happened to them and where did they go? Mars is a small planet, it has small gravity and it cannot cling onto an atmosphere, so eventually atmospheric pressure began to drop on the surface until it hit the boiling point of water. Liquid water on the surface of Mars will boil all by itself because the atmospheric pressure there is only 1% that of Earth. In fact, in outer space; a glass of water will boil all by itself. If a human, for example, were to walk on the surface of Mars without the aid of a spacesuit or specialized equipment, first the blood within the body would begin to boil, pressure would build out at about 15 lbs per square inch and sadly the person would explode in all directions and the blood would crystallize into ice crystals. If you remember, we saw similar scenes in the movie “Total Recall” and also “Mission to Mars.” 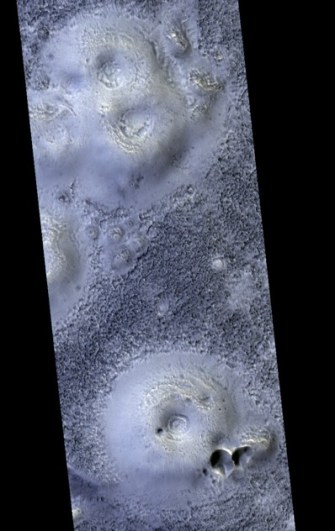 Some scientists think these domed features (above) on Mars are mud volcanoes, and could provide windows into Mars’ astrobiological past. Image: NASA/JPL/University of Arizona.

Some Doubts About the Future of Independent Bookstores

Last week I posted somewhat optimistically about media reports suggesting a rebirth for independent bookstores. In reply, below is a guest contribution from my colleague Paul D’Angelo, a professor of […]