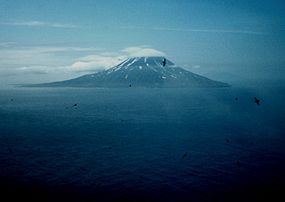 Sarychev Peak in the Kuril Islands in 2007, the source of the large ash column currently disrupting transpacific air traffic.

It seems that the eruption at Sarychev Peak in the Kuril Islands of Russia might be a lot bigger than it first seemed. I’ve gotten a couple reports of flights to Tokyo from North America being diverted or delayed due to the ash threat, including All Nippon Air Flight 1 (Washington DC to Tokyo) and Continental Flight 7 (Houston to Tokyo, diverted to Anchorage). The NASA Earth Observatory has some great new images of the eruption taken today from the MODIS on the Aqua Satellite showing a tiered plume that might be as tall as 16.5 km / 10 miles, which would make sense if flights are being diverted. Air Canada has warned that many flights from Vancouver to the Far East, including Tokyo, Hong Kong, Beijing, Seoul and Shanghai might be delayed or canceled due to this eruption. SVERT in Russia has been overseeing the response to this eruption. The updates are a little spartan when it comes to information in english, but it is a good place to start when looking for the latest on the eruption. However, the Volcanism Blog has some great information (as usual) on the eruption, including a series of images of the thermal anomalies captured by the MODIS from the 11th to the 14th of June, showing the expanding eruption cloud. If any Eruptions readers find more details or if you are on a flight diverted/delayed by the ash, please leave a comment!

Psychologists are finding that moral code violations can leave an enduring mark — and may require new types of therapy.
Up Next
Guest Thinkers

A new eruption in the Kuril Islands that started last week could potentially threaten Pacific Rim air traffic – and NASA has some impressive images of the eruption from space.