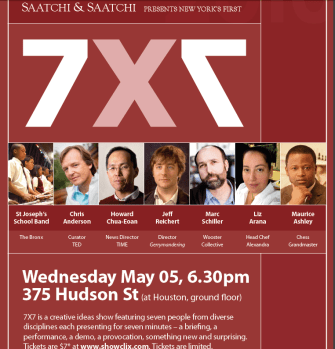 20 minutes or less) events, Saatchi & Saatchi asked 7 of the world’s

leading creative thinkers in 7 very different fields to share their

ideas in 7 minutes or less at the first-ever 7×7 event in New York City. The speakers, ranging from the curator of the world-famous TED Conference to an ESPN Chess Grandmaster, took three basic approaches to winning friends and influencing followers in their allotted seven minutes: Going Global, Staging It Live, and Stimulating the Senses.

Going Global: Marc Schiller, CEO of digital marketing agency Electric Artists and co-founder of Wooster Collective, led audience members on a whirlwind tour of street art from New York to Europe to Australia, showing how and why graffiti artists are risking arrest to beautify public spaces and bring meaning to previously meaningless locations. Similarly, Chris Anderson of TED demonstrated the alluring power of innovative ideas by showing how TEDx events are sprouting up on every continent.

Staging It Live: Maurice Ashley, a Chess Grandmaster and an on-air chess commentator for ESPN, was perhaps the most inspiring speaker of the night, turning a routine chess match into a epic narrative more exciting than the running of the Kentucky Derby this past Saturday. He raised the stakes of audience participation by inviting two chess champions — one in Belize (!) and one in New York City — to compete in a frenetic, two-minute chess match via Internet. During the match, Maurice gave a live play-by-play, turning a simple castling into the type of drama one typically associates with a world-champion sprinter running the 100-meter dash in under 10 seconds.

Stimulating the Senses: Think beyond the spoken word or the brief video clip. The audience gave a rousing ovation to the St. Joseph’s School Band from the South Bronx, who put on a tremendous live performance of Gustav Holst. Liz Arana, head chef at Alexandra restaurant in NYC, gave a live cooking demo of fried calamari that filled the hall with aromatic scents and left people talking excitedly about what they were smelling.

My takeaway lesson for the night: powerful ideas are made even more powerful by embracing one of the three presentation approaches above. If you’re consulting to a Fortune 500 company, you probably won’t get the opportunity to cook fried calamari while discussing P&L opportunities, but the idea of Going Global and Staging It Live are two particularly powerful presentation concepts that can help you win friends and influence followers — all in 7 minutes or less.

More and more business leaders are starting to lean on learning and development for support in facing essential challenges.
Neuropsych

The road to happiness is indirect and full of frustration.
▸
with
Tal Ben-Shahar
13.8

From succubi to aliens, stories of abductions or other unsettling encounters have been with us for millennia. What explains them?
Up Next
Guest Thinkers