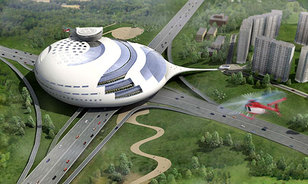 The fascinating thing about emerging markets is that they sometimes skip a step when it comes to economic development. It looks like Russia has skipped the Frank Gehry phase of architectural development (at just the moment when Barry Diller is itching to unveil the new Gehry masterpiece in New York!), in favor of, well, a Battlestar Galactica phase of architectural development. Russian business magazine Expert has the details on a new UFO-like structure planned for Moscow (you’ll have to pardon my translation from Russian to English):

“In Moscow, at the intersection of Michurinskii Prospekt and Lobachevskaya Street, there will appear a unique building — the “Galaktika” complex. The project was presented at the recent exhibition of real estate in Cannes, and has already been approved by the mayor of Moscow. The giant flying saucer (i.e. UFO), which will start construction at the end of this year, includes a traffic circle, a shopping & entertainment center, a luxury hotel and an eye-catching, wrap-around parking area. The traffic circle, according to the opinion of the developers and investors, will help solve the problem of traffic jams at the intersection.”

This is not the only time that Russia has surpassed the West when it comes to technology and innovation. For example, the state-run phone lines were so bad during the Soviet era that the country essentially leap-frogged the West when it came to the adoption of mobile phones. A colleague from Moscow recently visited New York and remarked wonderingly: “Why doesn’t anyone use cell phones here?” When I pointed out the large number of people on the streets of midtown Manhattan using cell phones, this guest was still not impressed: “But in Moscow, everybody has a mobile phone!”