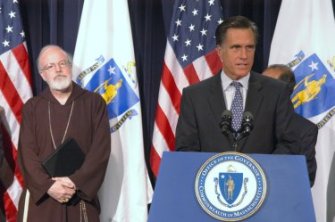 For those closely watching Gov. Mitt Romney’s presidential prospects, and what a Romney presidency might look like in terms of science-related policy questions such as stem cell research, abstinence education, and emergency contraception, you will want to check out this Sunday Boston Globe article:

” I sat down with a researcher. And he said, ‘Look, you don’t have to think about this stem cell research as a moral issue, because we kill the embryos after 14 days,’ ” Romney recalled on ” The Charlie Rose Show ” last June, characterizing the meeting as a watershed moment for him. “That struck me as he said that.”

Melton remembers the session differently. “Governor Romney has mischaracterized my position; we didn’t discuss killing or anything related to it,” he said in a statement last week. “I explained my work to him, told him about my deeply held respect for life, and explained that my work focuses on improving the lives of those suffering from debilitating diseases.”

In the years since that meeting, Romney has cast his education on stem cells as his awakening on “life” issues, triggering, for example, his change to a vocal anti abortion stance after years of supporting abortion rights. More broadly, the stem cell debate became a catalyst for Romney to methodically redefine himself as a conservative for 2008. Romney attacked Harvard and the controversial cloning technique in interviews with prominent conservative journalists.

He told Republicans in Spartanburg, S.C., that “science must respect the sanctity of human life.” He sent out a political fund-raising letter touting his valiant fight against the liberal establishment over what he called “human cloning.” Now, with less than three weeks left in office, the governor will leave Beacon Hill a far more socially conservative voice than when he arrived in 2002, and when he ran for Senate in 1994. On stem cell research, abortion, emergency contraception, abstinence education, and gay rights, Romney’s shifts to more conservative positions have estranged him from a state that elected him as a moderate.