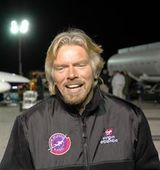 Within the financial services space, the P2P social lending phenomenon continues to gather momentum. Now, as alarm:clock points out, it looks like billionaire British tycoon Richard Branson has stepped up to the plate with an investment in social lending site CircleLending. If all goes according to plan, we might be applying for loans from Virgin USA Bank sometime soon:

“The P2P lending area is starting to get very interesting. Virgin USA

has acquired a majority stake in CircleLending. No financial terms were

disclosed. The Waltham, MA-based site creates a framework for managing

loans between relatives, friends and other private parties. Sir Richard Branson’s Virgin explains: “The investment will form the

loan volume, while maintaining a default rate of less than 5% on

private loans and less than 1% on private mortgages. CircleLending had raised $16M in VC funding from Venrock, Monitor

with VC-backed Zopa and Prosper.”

Anyway, if you’re interested in learning more about the social lending trend, the Open Business blog has put together a comprehensive set of site profiles for the likes of Zopa, Prosper, Fundable and Kiva.

Apparently, young Americans have little or no idea of where the best innovation in the world is taking place. When in doubt, they simply assume innovative high-tech products come from […]