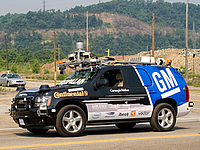 What a long strange trip it’s been for U.S. automakers Ford and GM. After a recent multi-year stretch in which their names were synonymous with “cars we don’t want to buy,” these auto manufacturers are now turning heads at the Consumer Electronics Show in Las Vegas and restoring their reputations by getting the word out about exciting new technology offerings. This week, Rick Wagoner of GM became the first-ever automaker executive to give a keynote address at the CES event, while Microsoft’s Bill Gates gushed over the new Ford Sync technology. As the Wall Street Journal reports, GM is stirring up the innovation pot with plans to develop a car that practically drives itself:

auto giant. In Mr. Wagoner’s vision of the not-too-distant future,

will be able to brake and accelerate on their own, avoid accidents and

spot congestion. And he’s determined to have GM be seen as leading the

“We see vehicles going from being largely mechanical to becoming more

and more electronic,” Larry Burns, chief technologist at GM and a

confidant of Mr. Wagoner’s, said in an interview last week. “We can

While it may be a bit premature to look for any accretive effects to the stock price of either Ford or GM, it’s interesting to see how the mainstream media is already picking up on the story idea of the “tech-savvy U.S. automaker” making a return to former glory.