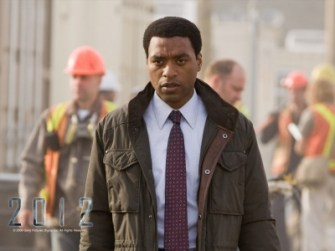 Chiwetel Ejiofor as geologist Adrian Helmsley in last year’s blockbuster 2012 is one of the many emerging “hero” images of scientists in popular film and television.

In graduate school, I published with several colleagues a paper examining the portrayal of scientists in film and television and the relationship to audience perceptions. At last week’s workshop on science and art in Alberta, I had the opportunity to return to this topic, one that remains much debated by commentators and scientists.

Contrary to conventional wisdom that entertainment media portray science and scientists in a negative light, research shows that across time, genre, and medium there is no single prevailing image and that both positive and negative images of scientists and science can be found. More recent research even suggests that in contemporary entertainment media, scientists are portrayed in an almost exclusively positive light and often as heroes.

Critics of the entertainment industry point as hard evidence of negative portrayals to a study from the early 1980s by former University of Pennsylvania communication researcher George Gerbner. The study showed that scientists in comparison to other occupations featured in primetime television suffer a higher ratio of negative stereotypes and are more likely to be victims of violence. Yet more recent research indicates a major shift in the image of scientists on the screen. In a 1998 unpublished report to the U.S. Department of Commerce, Gerbner and colleagues updated their analysis, concluding that based on data collected during the mid-1990s “there is no basis to claim that any kind of systematic negative portrayal of scientists exists. Changes have occurred in Hollywood since the time of our initial study, which found scientists to be typically evil, disturbed, sexually dysfunctional villains….this is no longer the case.”

More recent analysis of TV content presented last year at a major communication conference confirms this trend towards an overwhelmingly positive image for scientists in prime-time television. Scientists–similar to their distribution as a profession among the population–still remain a rare character in the TV world, but when they are shown, they are almost exclusively shown in a positive light.

Over the past two decades, not only has the image of scientists in film and television shifted, so have the stereotypes held by audiences. A study published this month analyzing U.S. national survey data finds that in comparison to 1985, American adults in 2002 were far less likely to hold negative stereotypes about scientists and were much more likely to believe that a career in science was a desirable choice for their children or for themselves. (This is yet another study that challenges the “fall from grace” narrative about science in American society and the claims about a hostile public.)

Beyond these statistical indicators of the portrayal of scientists, what kinds of images have appeared over time and across genre? What image might be on the rise today? In the paper I published with colleagues in 2002, we highlighted several different clusters of images.

Scientists as Dr. Frankenstein: This image is one that scientists most frequently single out, portraying their profession as sinister, socially irresponsible, evil and violent, and ultimately headed for failure and demise by the end of the plot. Examples of this image include Gregory Peck as Dr. Mengele in Boys from Brazil, Marlon Brando as Dr. Moreau in The Island of Dr. Moreau, and Jeff Goldblum as the scientist in The Fly.

Scientists as powerless pawns: In this image, scientists are shown as easily manipulated or dominated and as pawns doing dirty work for big business, the military or a master evil figure. Examples include Robert Duvall as Dr. Griffin Weir in the 6th Day and several of the scientists in Jurassic Park who work for Richard Attenborough’s character John Hammond, CEO of InGen.

Scientists as eccentric and anti-social geeks: In this image, scientists are so dedicated that they spend most of day at work, they deviate from norm in dress and looks, and have few families, friends, or romantic interests, and are generally socially awkward. Examples of this image include Christopher Loyd as Doc in Back to the Future, the nerdy boys in John Hughes 1985 film Weird Science who use science to create the perfect woman, and Val Kilmer and his fellow grad students in the 1985 film Real Genius who serve as graduate students to a professor who is determined to master a Star Wars-like satellite technology.

Scientists as Hero: In this image, scientists take on the lead role as action hero and protagonist, often also serving as the voice and force for ethical decisions and virtue. Examples include Dr. Alan Grant as the main protagonist in Jurassic Park, Spock in the new version of Star Trek who takes on leading man and action hero qualities to rival Captain Kirk, Jody Foster’s character in Contact, Sigourney Weaver’s character in Avatar, Denis Quaid as the climate scientist hero in The Day After Tomorrow, Chiwetel Ejiofor as the geologist hero in 2012, Morgan Freeman in the Batman films as inventor Lucious Fox and CEO of Wayne Industries, and Robert Downey Jr. as Tony Stark in the Iron Man films.

What do readers think of this typology? Other examples or images to add?