Our Sun has been asleep for a while, but now it’s starting to wake up. You’ve probably read or heard about the recent solar storms that sent plasma towards Earth, causing fantastic light shows filled with dancing arrays of colors ranging from greens, purples, pinks and even reds. Newspapers, television and the Internet have been booming with headlines about the recent geomagnetic storms and auroras appearing as far south as Michigan and Wisconsin.

The photo below was taken in Oak Heights, Ontario., near Brighton, just after midnight on Aug. 4th. 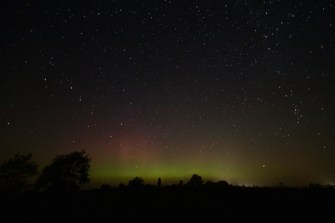 The photo below was captured by Shawn Malone of Lake Superior Photo just outside of Marquette, Michigan over Lake Superior.

Solar activity rises and falls on a regular cycle of about 11 years. We observed the last major peak of activity in late 2001 so this recent activity may be a sign that the Sun is starting to wake up.

August 1st was the day that almost the entire side of the Sun that faces the Earth had a bit of a temper tantrum known as a “coronal mass ejection” or (CME).  Although the eruption—described by astronomers as a Class C3 eruption—didn’t cause any damage to Earth, it gave us a show of the glowing displays of curtains and streamers of multi-colored light. Larger flare-ups, referred to as “M” or “X” class, are the ones we really need to worry about. In a previous blog post—“A Possible Solar Storm in 2012?”—I touched a bit on the massive 1859 solar storm (The Carrington Flare) that paralyzed our telegraph wires. This is a prime example of the size of solar storm that we need to worry about. Satellites, global communication, GPS, the Internet would be disrupted. Whole continents would be without power. Another geomagnetic storm in 1989 caused a major shut down of Quebec’s power grid causing over 5 million people to be without electricity.

These coronal mass ejections are seen using coronagraphs, which generally allow an instrument to block the light coming directly from the Sun. They are quite amazing actually, a large (CME) can consist of literally billions of tons of matter (plasma consisting of primarily electrons and protons in addition to small quantities of heavier elements such as helium, oxygen and even iron), all entangled and intertwined in a powerful magnetic field erupting from the Sun at speeds ranging from 20 km/s to over 3,000 km/s.

Recent scientific research shows that the phenomenon of magnetic reconnection is mainly responsible for these coronal mass ejections. This is the rearrangement of magnetic lines of force when two oppositely directed magnetic fields are suddenly brought together. This animation, for example, shows a cross-section through four magnetic domains undergoing separator reconnection. Field lines (and associated plasma) flow inward from above and below the separator, reconnect, and spring outward horizontally.

The animation below, for example, shows a cross-section through four magnetic domains undergoing separator reconnection. Field lines (and associated plasma) flow inward from above and below the separator, reconnect, and spring outward horizontally.

So there are really two sides to this; Although these geomagnetic storms can give us breathtaking views in our skies, they can also wipe out our satellites, ability to communicate and even severely damage our power grids. A small snippet from my previous solar storm blog entry“It pays to do certain things now because we do face the inevitable. For example, even though satellites currently in outer space cannot be reinforced, the next generation of satellites should be reinforced to withstand the full brunt of the solar winds and solar flares. Also, on Earth, power stations and especially transformers should be insulated and reinforced so as to be able to withstand radiation coming from outer space.”

Let’s hope that when the sun’s cycle peaks around 2012 or 2013 that we dodge the bullet and we see nothing more than a spectacular light show.

“When life is being led in public, every word and gesture is open to criticism.” A new book explains how social media recall the dating games of Jane Austin’s provincial England.