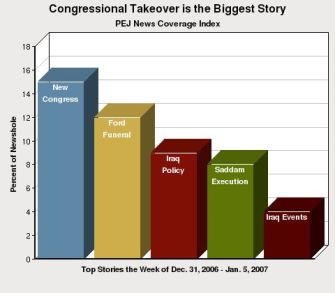 Every Tuesday, the Project for Excellence in Journalism will be releasing their weekly news index report, an analysis that tracks the major stories across media sectors including daily newspapers, online news, network TV news, cable news, and radio. Last week was the first report for 2007.

According to their numbers, the top story across all outlets was the official takeover by new Democratic Congressional leadership, which made up 15% of the overall newshole. That was followed by the death and state funeral of Gerald R. Ford (12%). The debate over U.S. Iraq policy finished third at 9%. By week’s end, it edged out the execution of Saddam Hussein at 8%, a story made bigger by the subsequent fallout over the taunting by his guards. Events on the ground in Iraq was the fifth biggest story at 4%, dominated by the announcement that the U.S. death toll had passed the 3,000 mark. Check out their analysis for interesting differences across cable TV and print coverage.