As I wrote in my past blog entry, “The 1000 Genomes Project Will Help Us Understand Genetic Variations,” it initially cost $3 billion to fully sequence all of the 25,000 or so genes that describe a human being. The resulting data is essentially an “owner’s manual” for our body, giving us invaluable insight into our genes. From this genome, we can determine our chances of coming down with certain diseases, and can trace our genetic lineage back thousands of years. As part of a BBC/Discovery Channel documentary, I myself had many of my own genes sequenced.

Today this process is now largely automated by computers and robots, and the price of personal genomic sequencing has plunged down to $50,000 per genome—and will eventually drop to less than $1,000. With the price dropping so rapidly, gene sequencing companies seem to be popping up all over the world, each with their own patented technology, process or method.

One example of one of these technologies is called Nanopore which was devised by Oxford Nanopore Technologies and Harvard University. This particular process uses a series of insulated membranes which are used to single-molecule detectors. Several companies around the world have licensed the sequencing technology and are making headway with their own research. I suppose that you could think of this as a race; not so much who can reach the finish line first to win the medal but rather who can create a method that sequences the genome which is both faster and more affordable than the competition.

Genome sequences don’t only apply to humans, or organisms for that matter. Scientists and researchers around the world are making extraordinary leaps and bounds in understanding the genetic makeup of plants and fruits. Just last month an international team of scientists led by the University of Florida and Virginia Tech is the first to publish the DNA sequence for the strawberry—a development expected to yield tastier, hardier varieties of the berry and other crops in its family. The genome sequence was obtained by a team of 75 researchers from 38 institutions around the globe and was published on Dec. 26 in the online version of the journal Nature Genetics. You may also download the entire 10-page PDF of the results. One of the researchers stated that the team has essentially created a parts list for the strawberry. The press release also stated that having that “parts list” in hand will enable strawberry breeders to bring new varieties to market faster, creating plants that can be grown with less environmental impact, better nutritional profiles and larger yields.

Image: A schematic representation of the positions of 389 RosCOS markers on the seven pseudochromosomes (FC1-7) of F. vesca (Woodland Strawberry) in relation to their bin map positions on the eight linkage groups (PG1-8) of the Prunus T × E reference map. The diagram was plotted using Circos; map positions from the Prunus reference map were converted to approximate physical positions for comparison by multiplying the marker positions in cM by 400,000. Markers were spaced at 100,000 nucleotide intervals within each T × E mapping bin

In another groundbreaking development, a company called Ion Torrent has created a gene sequencing machine that fits on a tabletop. Until now, sequencing devices have generally been the size of a mainframe computer or server. The new Personal Genome Machine (PGM) by Ion Torrent (picture below) can be purchased for around $50,000 and can sequence an entire genome in about two hours with high degrees of accuracy and precision. There is also additional equipment that the “PGM” needs in order to make it work properly so the price of the machine can rise quickly. The “PGM” is essentially the very first attempt by a company to bring faster and affordable genome sequencing to the general markets. Read the original Press Release and be sure to pay a visit to the Ion Torrent YouTube Channel for videos about the technology. Some are likening the product to the release of the first Apple computer and how it revolutionized the world. Not to mention that financial analysts are predicting that this particular type of technology is the basis for the next $100 billion industry. Billions of dollars are already be invested in these industries so it wouldn’t be far off to say that the next five years is going to bring about even more unique, workable and interesting sequencing technologies. 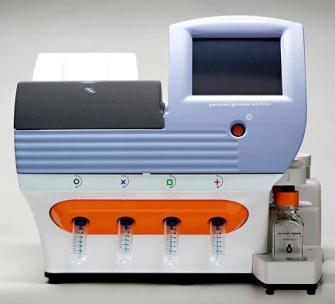 The Ion Personal Genome Machine (PGM™) sequencer can do runs in about 2 hours, offers semiconductor scalability and is one tenth the price of other sequencers to buy and to run. A touch screen guides the user through every step of the run, making it simple to use. The PGM weighs less than 50 pounds and has a foot print that’s no bigger than a desktop printer, so it can fit in any lab.
Related
The Learning Curve

From active listening to giving feedback, these five capabilities are integral to interpersonal skills training.
Up Next
Technology & Innovation

Government health and retirement programs are on paths that will slowly but inexorably bankrupt us. It is not too late to solve the problem.