Every once in a while, scientists come up with an clever idea that is so novel and unexpected that it catches you by surprise. The idea by itself may not be revolutionary, but it represents a fresh way to tackle an old problem!

Everyone knows that airplanes fly because they move in the air, but it not obvious that you can also create lift by using light pressure. In the same way that the curved wings of an airplane generate lift due to air pressure, scientists at the Rochester Institute of Technology have used laser beams passing through curved lenses to generate lift as well. The effect is tiny that no one expects to make airplanes fly via laser beams. But it’s possible that this effect could be useful when moving nanoscale objects, or perhaps maneuvering solar sails in outer space.

Scientists and researchers alike have shown for years that when photons bounce off of objects, they can create pressure, causing the object to be pushed. This idea is essentially the concept behind solar sails for propulsion in space, although we haven’t successfully been able to test the concept in a space-like environment until just recently. In late May, the Japan Aerospace Exploration Agency (JAXA) launched the “IKAROS” (Interplanetary Kite-Crafy Accelerated by Radiation Of the Sun) spacecraft which successfully deployed a 200m(squared) polyimide sail on June 10th. Later in July, it was confirmed that the sail was officially collecting radiation from the sun and began its photon acceleration. Per SpaceDaily.com “Just yesterday (December 6th, NASA successfully ejected a nanosatellite from a free-flying microsatellite. NanoSail-D ejected from the Fast, Affordable, Science and Technology Satellite, FASTSAT, demonstrating the capability to deploy a small cubesat payload from an autonomous microsatellite in space.” (Image Below) 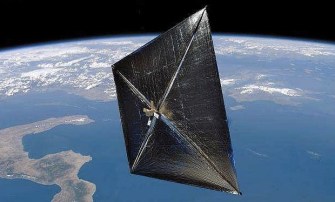 The concept of the solar sails has been around for decades, but this new research may have given light some new tricks. Although the micometer scale lightfoil described in the latest edition of Nature Photonics shows the concept on a mini scale, the team’s lead researcher Grover Swartzlander states that this proof of concept will essentially allow us to both create and control this form of “optical lift”. According to Science News “Optical lift is different from the aerodynamic lift created by an airfoil. A plane flies because air flowing more slowly under its wing exerts more pressure than the faster-moving air flowing above. But in a lightfoil, the lift is created inside the object as the beam shines through. The shape of the transparent lightfoil causes light to be refracted differently depending on where it goes through, which causes a corresponding bending of the beam’s momentum that creates lift.”

The new lightfoil that the team has created basically operates in the same fashion as an airfoil. One side is completely flat while the other side is rounded; instead of air flow, the team is shining light directly on it from beneath. Using a series of computer models, the researchers testing this idea using passing laser light through a series of cylindrical rods which caused their micrometer foil to achieve optical lift. Solar sails are generally designed to harness light to “push” a spacecraft whereas the Rochester team designed their lightfoil to lift in a perpendicular direction; this is where the idea of being able to steer a future spacecraft comes into the mix. They knew that they were onto something because the same test proved that symmetrical spheres didn’t exhibit this same lift effect. 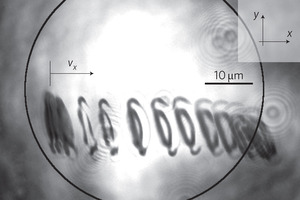 (Photo Above) Time-lapsed composite image (1.67 s per shot) of a semi-cylindrical rod lifting sideways from left to right near the bottom of a glass chamber, as a result of a transverse optical lift force. Image credit: Nature Photonics

(Team Photo Below) Grover Swartzlander, left, led an RIT research team that has proven the existence of stable optical lift—the use of a beam of light to move and manipulate particles (similar to how air is used to achieve airplane flight). Also pictured are Timothy Peterson, second left, a master’s student in computer science; Alan Raisanen, associate director of RIT’s Semiconductor and Microsystems Fabrication Laboratory; and Alexandra Artusio-Glimpse, right, a doctoral student in imaging science. 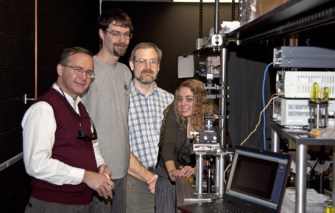 The team said that the technique could be used to power microscopic machines or even transport different types of particles in liquids. If this technique could be scaled up in the future, it could be used to steer large spacecraft like IKAROS (discussed above). Another experimental solar-sail spacecraft, LightSail-1 which the Pasadena, Planetary Society plans to launch later this year could also make use of this new technique. Presently, spacecrafts like IKAROS or the upcoming LightSail-1 are only limited to going in one direction and that’s the direction that the sun pushes it in.

The genes responsible for facial features may also influence behavior.
Up Next
Surprising Science

Fusion Really Is 20 Years Away

Scientists always say that fusion is 20 years away, but this time the physicist says it’s for real.