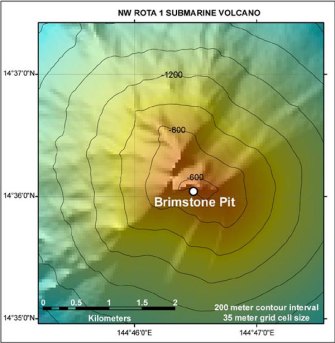 nnFor those of you interested in what happens in the realm of submarine volcanism, I can pass on some tidbits I’ve gotten about NW-Rota 1, a submarine volcano in the Mariana Islands (see bathymetry above). Dr. Ed Kohut (Petrogenex), a friend of mine from my days at Oregon State Univ., is currently on a JAMSTEC research cruise in the Mariana Islands, visiting the area about NW Rota-1. He reports:n

“We just reached NW-Rota 1. It is still actively erupting. To put that in perspective, it has been observed erupting every time it has been visited since 2003. Today’s actvity is not as vigourous as in past visits, but there are billowing sulfur laden plumes and the summit has increased ~15 meters since the last ROV visit  (in ’06?).”

nSeems that this seamount continues to chug away under ~500 meters of seawater. It is most famous for the 2004 eruption that coated an ROV that visited the volcano with ash and molten sulfur during an eruption (all under water). Below is a short video from a 2006 research cruise of the vigorous behavior at the vent called “Brimstone Pit”, which produced the 2004 eruption. You can clearly see the ash, rock and gases being ejected from the vent, all under half a kilometer of seawater!nn

More signs of melting at Redoubt

The “eruption watch” continues at Redoubt … Saturday revealed that things are getting hotter at the summit near the 1989/1990 dome (see picture above that made Redoubt famous in 1989). […]