I almost let it slip by, but Jon Frimann reminded me that this week marks the one-year anniversary of the start of what came to be the biggest volcanic event of 2010: the eruption of Eyjafjallajökull in Iceland. The eruption started off relatively inauspiciously, with a fissure vent eruption at Fimmvörðuháls, the saddle between Eyjafjallajökull and Katla. This fissure went on to become quite the tourist destination as the first fissure, followed by a second fissure that opened in late March, produced abundance fire fountaining of basaltic lava (see below and top left). A number of lava flows snaked their way down the drainages near the Fimmvörðuháls, but all in all, the eruption was about as “picture perfect” as you could hope – you could watch the activity from your home via the webcam, few people were killed or injured (and those that died were from exposure) and little disruption of daily life occurred. The activity at the fissures seemed to dwindle by mid-April and we began to wonder if the eruption was over. Of course, all of this changed in April 13, when the eruption changed from the Hawaiian-style volcanism at Fimmvörðuháls to the explosion sub-Plinian eruptions under the ice cap at Eyjafjallajökull – but we’ll get to that when that anniversary rolls around next month! 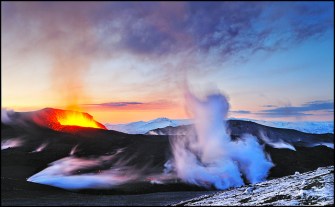 Light carries with it the secrets of reality in ways we cannot completely understand.
Up Next
Videos

In the tradition of Jay-Z and Jean-Michel Basquiat, YouTube users create brilliant “vernacular moments”—moments filled with pure expressivity that don’t bother to think of themselves as art.