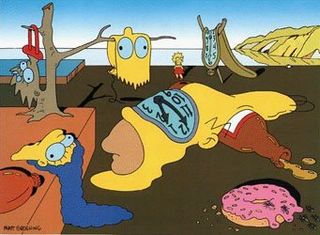 The Internet recently celebrated its 40th anniversary — although to many of us in the social media world it feels like the Internet was just born yesterday. In many ways, the growth and evolution of the Internet over the past decade has been the perfect capstone to the post-modern age. The Internet had the ability to challenge the very fundamental pillars of society, upend entire industries, and make cultural production (via social media) available to just about everyone. For the past five years, search has been the dominant paradigm – the search for knowledge, the search for connections, and the search for meaning. The very intellectual underpinnings of post-modernity — skepticism, relativism, anonymity, even absurdity — were transformed into the dominant ethos of the Internet. If there was one word to describe the Internet ethos, it was Snark — and snark is nothing less than the epitome of post-modernist thought. And if there was one image to summarize the post-modernist Internet, it was The New Yorker’s famous cartoon of a dog tapping away on a keyboard and the caption “On the Internet, nobody knows you’re a dog.” In the post-Modernist age, even the sense of “self” had been transformed by the Internet — you were whoever you said you were on the Internet. In short, post-modernism was the Internet, and the Internet was post-modernism. So… the inevitable question becomes — What comes next after post-Modernism? And, by extension, what comes next for the Internet?

My colleague Ruben Sun suggests that the Internet is evolving to a type of alter-modernism:

This last one is still a rather new way to look at thought, though one

And, last summer, Fred Wilson suggested that the Internet was being transformed by pseudo-modernism:

that he calls pseudo-modernism. I don’t like that word. But his

observations ring true to me. […] Kirby is right. We’ve moved into a new phase of society. One that

emphasizes participation in culture and society and and technology and

politics. If it weren’t such a mouthful, I’d suggest we call it

No matter how you look at it, it just feels like the Internet is approaching a new, post-postmodern age. And that has a huge impact on the types of startups that people launch, the types of recent graduates that flock to innovation hubs like Silicon Valley, and the types of websites that become part of the cultural mainstream.

In my mind, the following are examples of post-modernism: Gawker (irony, snark, cultural nihilism), Google (searching for the unknowable but “feeling lucky” that you might find it in the end), Facebook (deconstructing the meaning of “friend” to near meaninglessness), social media (obliterating the distinction between the producers and consumers of culture), the Long Tail (taking the cultural elite and replacing it with a form of cultural relativism), and Twitter (reducing communication to its bare essence of 140 characters, broadcast to everyone and no one at the same time). It’s safe to say that the most popular and most important trends of the past five years have all been, in their essence, post-modernist.

In their place, will come a new form of post-postmodernism. Call it trans-modernism or whatever you like. It will be a reaction against the post-modernist age. It will be more rationalist (data and raw information transformed into meaning, rather than meaninglessness), more participatory, more hopeful (search engines like Wolfram-Alpha pre-supposing that answers can be known rather than searched for), and more hierarchical (people rejecting a cultural niche of one for a cultural mass of many) — but what else???