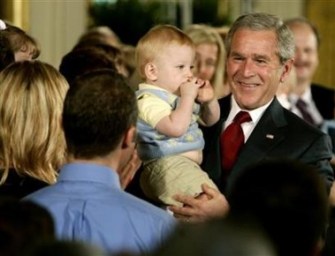 I’m sorting through all the news coverage this week, and will be having posts forthcoming summarizing the major frames and narratives that appeared in Editorials, Op-Eds, soundbites, and news coverage, but to start, the most stunning outcome from yesterday’s veto was to witness the clear dominance that Bush & Co. displayed when it came to visual framing. The battle over visuals is important. While the press tends to contextualize the issue and is more favorable ground for getting pro-research interpretations into coverage, the majority of Americans are going to rely on TV reports, headlines, and newspaper/online photos for their impressions.

As I’ve written previously, stem cell research advocates have been amazingly effective since 2001 in re-defining the issue around “research leads to cures,” “research is good for the economy,” and more recently, “current policy is morally inconsistent.” The California Proposition battle was won by running a $20 million campaign that focused almost exclusively on the themes of cures and economic development, and given this one-sided information environment about the issue, public support for the referendum moved from the 40% level to majority support by election day.

It’s similar re-framing at the national level that has helped push public support for SC research using embryos left over from in vitro clinics to slight majority levels, though most of this shift in support has occurred among Dems and Independents. In fact, post-2004, for the first time, polls indicated a major public opinion gap between Dems and Republicans on the issue. (Another framing tactic of supporters, as Nancy Pelosi was quoted as saying yesterday on NPR, is that Bush is going against the wishes of 75% of Americans. Though I wish that were true, I am afraid none of the independent polling I’ve seen bears that number out. More on this in later posts.)

So yesterday, in a White House press conference televised live on the cable news networks, Bush appeared in a packed room of families with children who were adopted as so-called left over embryos from IVF clinics. Also in the room were patients who had been treated with adult stem cell therapies. With the sounds of kids in the background, and a boisterous and supportive audience, the press conference was a stunning success, and the photos that ran on the news wires and that were picked up in today’s newspapers support my judgment. These images immediately re-define the debate over research on left over embryos as really about research on human lives, “young humans” as Senator Sam Brownback repeats over and over again.

Stem cell advocates and members of Congress also tried to take advantage of visual framing. When giving speeches they appeared in front of banners with taglines that reinforced their preferred framing including “Providing Hope for New Cures” and “Stem Cell Hyprocrisy” (a reference to the moral inconsistency of Bush’s policy, allowing IVF clinics to needlessly destroy embryos, while not allowing scientists to work with those embryos to find cures.)

But compared to the President’s press conference at the White House yesterday, stem cell advocates were not able to beat the power of the bully pulpit. What follows are pictures that ran on the news wires, and are archived by Yahoo News. They speak for themselves. Unfortunately, that is the power of visual framing. One picture is truly worth a 1,000 words. 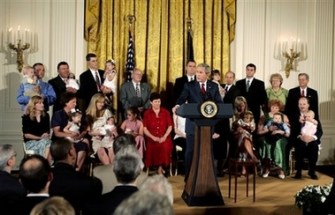 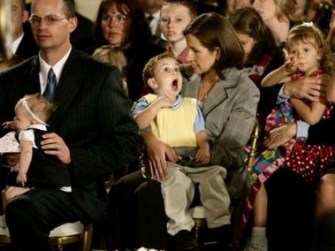 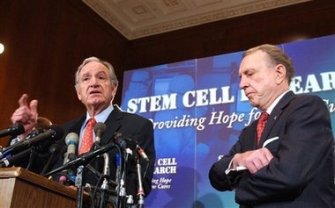 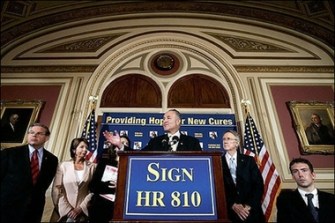 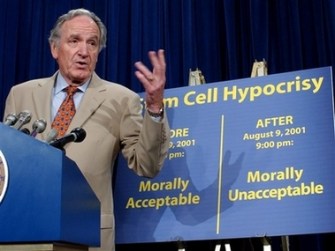