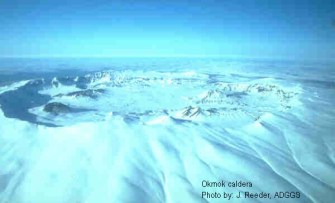 Okmok Caldera in Alaska’s Aleutian Islands erupted today, sending an ash column to at least 30,000 feet. Very little news has been released about the eruption so far beyond this information about the eruption column and some bits about precursor seismicity. A number of flights to Unalaska Island were cancelled due to the eruption. I’ll pass on more information when I get it.

Okmok is located near Dutch Harbor, Alaska and is a large shield volcano with two prominent calderas at the top. In fact, whenever I see pictures of the caldera, I am reminded of what Crater Lake (Oregon) might look without the water. These calderas formed ~12,000 and 2,050 years ago but most recent eruptions have been from scoria cones from within the caldera. The last eruption at Okmok was in 1997, a VEI 3, with the next previously eruption in 1986 (VEI 2). Now, before everyone gets excited because that makes ~10 years between the last three eruptions, the one prior to 1986 was in 1983. So much for patterns!

From the tiniest subatomic scales to the grandest cosmic ones, solving any of these puzzles could unlock our understanding of the Universe.
Up Next
Guest Thinkers