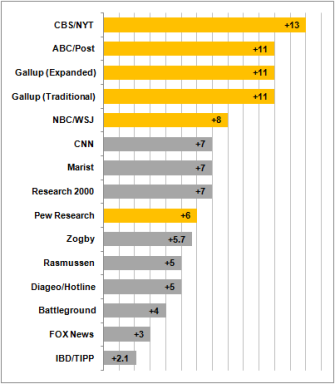 Polls including cell-phones are highlighted in orange.

Wondering about the variation across survey organizations in estimating Obama’s national lead? As I have been discussing in my research methods course here at AU, much of the variation is likely accounted for by differences in likely voter models but also in sampling differences that include either cell phones or landline phones only.

As Wired reports, over at the blog 538.com, Nate Silver shows that surveys that include cell phones average a 10pt lead for Obama, reflecting stronger support among younger voters and minorities. Among surveys that include only landline phones, Obama’s lead averages only 5pts.

To read more about the impact of the profusion of polls on coverage of the election, see this short chapter on the topic that I recently published at the Encyclopedia of Survey Research Methods.