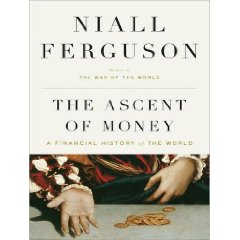 Niall Ferguson’s The Ascent of Money is a first-rate historical study of the growth of the modern financial system — and a look ahead at what might happen now that banks like Lehman Brothers, Northern Rock and Bear Stearns literally went to the brink. In a step-by-step, chapter-by-chapter approach, he outlines how different foundations of the modern financial system – like the credit markets and the housing market – “evolved” over time in response to certain needs and conditions. In fact, Ferguson suggests that the entire modern history of the world can be viewed in purely financial terms.

For me, perhaps the most interesting part of The Ascent of Money was the Afterword, in which he lays out the fundamental features shared by any industry and a truly “evolutionary” system:

(3) Competition for scarce resources, leading to a survival of the fittest scenario

(4) A mechanism for natural selection (i.e. how the market allocates resources based on over- or under-performance)

(5) The potential for speciation, leading to new “species” of financial institutions

(6) The ever-present threat of extinction, as species die out altogether

If you’d rather not dig through (a best-selling) 350 pages of financial history, you can also watch a four-hour video series over at PBS. Or buy a DVD for $24.99… These days, Niall Ferguson is just about everywhere.