For a few decades now, the title holder for largest volcano in the solar system has been Mars’ Olympus Mons. The volcano is a large – and by that I mean it covers the same area as the state of Arizona – basaltic shield volcano with multiple collapse caldera features on the summit (see top left). Some of the lava flows on Olympus Mons could be as little as 2 million years old, but that is somewhat controversial – the dating method on the flows is cratering of the surface, which can be rife with error. The volume of Olympus Mons is thought to be approximately the same as the entire Hawaii-Emperor Seamount Chain on Earth – or roughly 6-8 million km3. That is one large volcano … and they might not be extinct.

However, a recent study by Andrea Borgia and John Murray would like to wrest the title of the solar system’s largest volcano from Olympus Mons and hand it to another Martian feature – the Tharsis Rise. The Rise, the red area on the image below, is thought to be a “spreading volcanic edifice” according to Borgia and Murray, a feature that is caused by lava erupting and spreading laterally as the weight of the new lava that continues to erupt piles on top. The Earth analog to this would be Italy’s Etna, where Etna is the main edifice with some smaller parasitic cones. In the Tharsis Rise theory, the Mons of Mars – Olympus, Arsia, Pavonis, Ascraeus – are the parasitic cones on the larger Tharsis Rise. 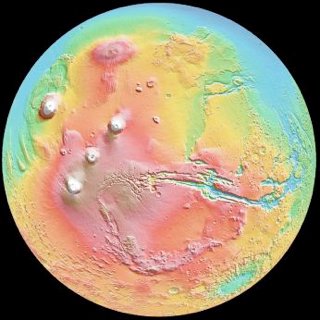 A false color image of the surface of Mars, where red/orange are high elevations and blue/green are lowlands.

Of course, the only way to truly prove if Tharsis Rise is a single edifice would be field observations on Mars, something that is a little hard to come by these days. A volcano the size of Tharsis Rise could offer some interesting hints at how magma is generated in the Martian interior, the composition of the Martian mantle and why it appears that Mars never had plate tectonics like we find on Earth.

John Micklethwait: China Will Be the Biggest Christian Nation

By mid-century there could be over 200 million Chinese Christians.