The recent shuttle launch has a strange passenger: a 330-pound humanoid robot called Robonaut 2, or R2 for short. It’s the first humanoid robot to be sent into space, and it may eventually be bound for the moon. R2 is designed to help astronauts perform tedious and dangerous missions. It’s designed so that it will eventually be able to vacuum air filters, do space walks, flip switches, and go into dangerous toxic environments. The robot has no legs, and is hence only 3 feet four inches tall. It is designed for a one-way mission, never to come back. That’s the advantage of robots” they are cheap, need no life support, and don’t need a return ticket.  The only drawback is that R2 is incapable of real human thought. It has no consciousness, and can barely recognize simple objects in its environment. It is a far cry from the humanoid robots of science fiction.

In the past, NASA has been criticized as being the “Agency to Nowhere.” President Obama canceled both the Space Shuttle and the Moon Program, and it seems that the glory days of the space program are gone.  China plans to put astronauts on the moon by 2025, so will the U.S. be left in the dust? Some NASA engineers are proposing, as a consolation, Project M to put R2 on the moon in 1,000 days. The advantage of this idea is that you can use off-the-shelf technology to put a robot quickly on the moon. Robots and moon rockets these days are not so expensive; putting R2 on the moon can be done with half a billion dollars, which is pocket change compared to the price tag of a manned mission to the moon: $150 billion.

Putting a robot on the moon might help to create excitement among young people, but it will not be a real science mission. The robot is rather primitive, and cannot do much beyond pick up rocks and walk around. So it won’t be like R2D2 in “Star Wars.” But this mission may eventually pave the way for what scientists really want: a permanent robotic presence on the moon. In the absence of a manned mission to the moon, perhaps the best that can be done for lunar exploration is to create a permanent robot base on the moon. 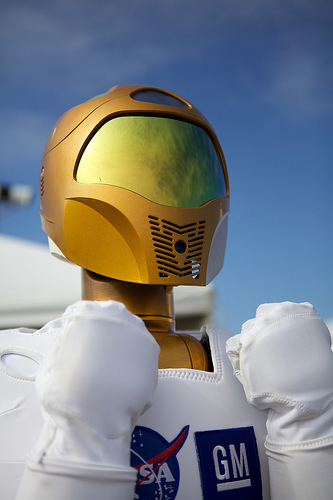 Time Lapse Video of Robonaut 2 getting packed for space flight