So let’s now speak about the future. You may have heard about the asteroid Apophis, which is about the size of the Rose Bowl Stadium. It’s said that the large asteroid will streak by the Earth sometime around 2029. The NASA website states that “The future for Apophis on Friday, April 13 of 2029 includes an approach to Earth no closer than 29,470 km (18,300 miles, or 5.6 Earth radii from the center, or 4.6 Earth-radii from the surface) over the mid-Atlantic, appearing to the naked eye as a moderately bright point of light moving rapidly across the sky. Depending on its mechanical nature, it could experience shape or spin-state alteration due to tidal forces caused by Earth’s gravity field…  Using criteria developed in this research, new measurements possible in 2013 (if not 2011) will likely confirm that in 2036, Apophis will quietly pass more than 49 million km (30.5 million miles; 0.32 AU) from Earth on Easter Sunday of that year (April 13).”

We are also amazed at the meteor showers when we are able to see them. The local news usually let’s you know when you will be able to catch a glimpse and you will find all kinds of people running outside to peer at the night sky. Perhaps one of the most famous meteor showers took place in 1833, the Leonid meteor shower (image below). This particular shower gave us several hundred thousand streaks per hour across the night sky. It was so brilliant and awe-inspiring that several religious cults can in some sense trace their lineage to the panic that was created as a result of this particular shower. So, speaking about the doom and gloom and mysticism surrounding these things, you may remember when Hale Bopp sailed through the heavens when we heard about the famed “Doomsday Cult” that believed the comet was a sign ofthe Second Coming. The cult believed that they were going to be beamed up to a flying saucer which they thought was on that comet and the members all ended up committing suicide as a result. This just goes to show that these types of things really stir deep seated fears andemotions in people. 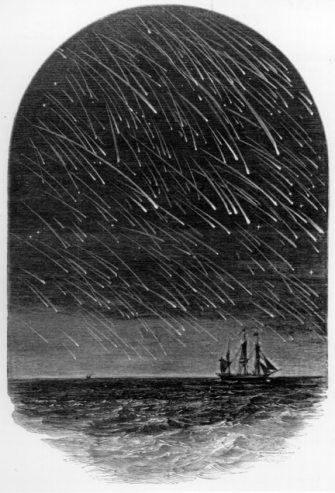 If you caught my Second Season premiere of my show Sci-Fi Science on the Science Channel which aired September 1, you would have seen an episode called Earth 2.0 which shows that the future of the human race may be the destruction that we fear here on Earth. The episode went into detail about the process of terraforming Mars, and featured ideas from Chris McKay, a NASA research scientist and even Bob Zubrin of the Mars Society. Chris McKay of NASA suggested the possibility of building huge solar mirrors the size of Texas to melt the Martian ice caps, and I even went into detail about how we could possibly heat up Mars by shooting asteroids at the planet’s surface essentially jump-starting the terraforming process. First, the heat ofthe impact would be that of millions of atomic bombs which would heat up the surface. Second, asteroids contain frozen gases which would help to thicken the atmosphere and finally set off a runaway greenhouse effect.

An Economic Index for Sex?

University classes are starting so I thought I would write a blog post that would encourage students to think about the world. This idea came from a project that was […]