It has been a bit of a disjointed yet busy week, so I thought I’d end it with a new Mystery Volcano photo. It might be another challenging photo like MVP #31, but we’ll see how you do – and again, try to offer as much detail as you can about the image.

As for Kirishima, the volcano in everyone’s eye, it continues to have explosive eruptions and Japanese officials are making contingency plans for a possible evacuation if the eruption gets worse. How might it get worse? Well, if the new dome in the crater (see top left) collapses or causes pressure to build in the conduit, producing a more explosive eruption, either scenario might generate the pyroclastic flows.

Here is the new MVP (reader submitted, no less) … give it your best shot, more detail the better. 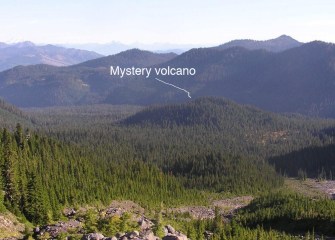 Click on the image to see a larger version.

I spent yesterday speaking to people in rural areas. Almost everyone was pro-Mubarak. You start to see some of the genius of the last two decades of information management.