This is my third blog post as the guest of the week so I thought it was time I introduced myself a little more and talked about where I currently live and work. As you can tell by my accent, I am from Melbourne, Australia but have been working and traveling as an international educator for over 10 years, along with my husband (mathematics teacher) and daughter (just hit the terrible teen years!). Places I have worked are Zambia, Kuwait, Bangladesh and now Qatar. Being our first year in Qatar we are finding our new school, Qatar Academy, challenging in many ways. However I am finding my new position as Head of Information Technology and E-Learning to be a wonderfully rewarding experience with lots of amazing opportunities to contribute to the growth of the school.

I am also responding to Scott’s post earlier today, The World is Spiky, where he shares some interesting insights from Richard Florida’s new book Who’s your city. From reading the words of Florida I think Qatar is in fact a ‘tall spike’ in an unflat world. Definition of this: “the tallest spikes that attract global talent, generate knowledge, and produce the lion’s share of global innovation.”
Qatar is an amazing place to be working right now. I found a blog post from last September after just arriving on ‘Sharing an amazing vision in Qatar‘ in which I wrote:

Here in Qatar I work atQatar Academy, a PreK-12 school now delivering the IBO curriculum across all levels (PYP, MYP and DP) which is located on Education City, a large campus on the outskirts of Doha. However I work forQatar Foundation

the innovation and creativity of His Highness Sheikh Hamad Bin Khalifa

Al Thani, Emir of the State of Qatar. QF is a non-profit organisation

and was founded in 1995, and Education City is their flagship.

vision and commitment to excellence in education here is amazing. The

money being spent and the rate of development is staggering. QF is the

driving force behind the countries commitment to education and to Qatar

becoming one of the most developed knowledge-based societies around the

world. To do this they are partnering with international educational

Nasser Al Missned, Consort of His Highness, serves as the chairperson

of QF and personally guides the organisation with passion, vision and

Since September the pace of change and development has increased if anything. Education City is like a construction zone, with a new academic medical center, a new library, a new convention center, an amazing equestrian center and many other buildings going up….and fast! In a recent article in the New York Times talking about the rush of American universities to set up in global locations it stated:

And many are now considering full-fledged foreign branch campuses,

particularly in the oil-rich Middle East. Already, students in the

Persian Gulf state of Qatar can attend an American university without the expense, culture shock or post-9/11 visa problems of traveling to America.

Education City in Doha, Qatar’s capital, they can study medicine at

at Virginia Commonwealth, engineering at Texas A&M, and soon, journalism at Northwestern.

And yet another article from the NY Times:

has fast become the elite of Qatari education, a sort of local Ivy League. But the five American schools have started small, with only about 300 slots among them for next year’s entering classes.

Thomas Friedman, author of The World is Flat, after a recent trip to Doha commented:

In Doha, since I was last there, a skyline that looks like a

mini-Manhattan has sprouted from the desert. Whatever construction

cranes are not in China must be in Doha today. This once sleepy harbor

now has a profile of skyscrapers, thanks to a huge injection of oil and

Then there are the other Qatari government initiatives in education from ICT Qatar that include e-Education and the e-Schoolbag program amongst other programs. I visited the new boys school rolling out the e-Schoolbag Tablet PC implementation and was duly impressed. There are many international consultants and educators currently working in Qatar, advising the government and supporting the vision with extra expertise and knowledge.

Qatar is determined to be a ‘knowledge society’ and with that vision in mind are carefully planning their approach to education. Yes, this is the Middle East and there are certain cultural sensitivities (aren’t there any where in the world?) however I am finding a certain liberal attitude and a genuine desire to move forward. At a recent parent-teacher conference (Qatar Academy has about 85% Arabic students) I was pleasantly surprised at the friendly parents who not only wanted to shake my hand (remember that it is not always acceptable for men to shake a woman’s hand here) but also called me by my first name.

So what does this all mean for the rest of the world?……well I suggest you all keep a close eye on Qatar. This is not a flash in the pan, this is a carefully calculated and planned development that is already making waves and impacting around the world. We have Al Jazeera news, we have Doha Debates, we had the Asian games 2006 and we are bidding for the Olympics for 2016. We have a clean city (I have just been to Mumbai and was brought back to the reality of a large, dirty city..what does Florida call them? ‘third-world megacities’), albeit a little sandy some days. Qatar really is a ‘tall spike in an unflat world’ and despite the environmental concerns caused by over-indulgence (thanks Tom for reminding us), it is a beehive for creativity, innovation and 21st century thinking.

In the words of Sheikha Mozah:
“Today we plant seeds, tomorrow we open frontiers, tomorrow is rooted here”. 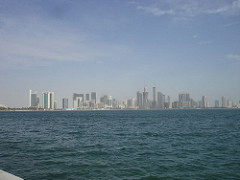 Animoto of a recent ‘dune bashing’ trip in the desert

Now, this may seem like I’m contradicting the opinion of the guest blogger last week. However, I’m not referring to the endless pursuit of rankings and grades. I’m meaning the […]