As many of you know, today we saw a new eruption at Grímsvötn under Vatnajökull in Iceland – its first eruption since 2004 … and boy, it was a doozy. Reports have the ash plume reaching upwards of 15 (possibly 20) km / 50-65,000 feet (see below or top left), making it possibly the tallest eruption plume in Iceland since the 1947 eruption of Hekla. The eruption seems to be centered under the Grímsfjall Crater, where magma reaching the surface would have access to a lot of water, adding to the explosively of the eruption itself – which is typical for Grímsvötn based on its previous activity. However, this eruption appears to be larger than the 2004 eruption. Of course, after Eyjafjallajökull last year, everyone is watching the ash very closely, but there are at least some second hand reports that the ash is much coarser than the Eyjafjallajökull ash, so much less of a threat to stay in the air and disrupt air traffic over Europe. Even the no-fly zone around the volcano is relatively small compared to the 2010 Eyjafjallajökull eruption (so far). The latest London VAAC ash models show the ash mostly around Iceland and in the North Atlantic. However, there has been heavy ash fall reported in many places in Iceland itself. 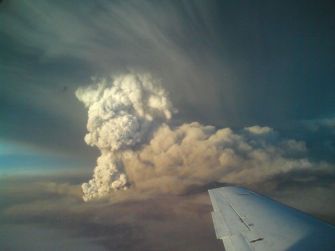 There are a plethora of images of the ash plume – along with video of the eruption, mostly seen from aircraft that approached the plume (video). Mila.is has set up three new webcams (one, two and three) to watch the eruption (once day breaks in Iceland if it is still going strong) – you can also try some of the other webcams points generally towards the volcano or in the region.

More updates as they arrive – feel free to post what you find as well.

{Special thanks to all Eruptions readers for information in this post.}

Top left: The eruptive column from the May 21, 2011 eruption of Grímsvötn in Iceland.

From active listening to giving feedback, these five capabilities are integral to interpersonal skills training.
Up Next
Surprising Science

Sniffing Out A Thousand Dimensions of Smell

Understanding the human ability to distinguish different odors may open the door to new ways of thinking about how the brain processes information and how we learn.