Some more volcano news for the day …

UPDATE 10:40AM Eastern: It has been pointed out to me that both of these articles are old. They apparently made it into my Google News feed thanks to a glitch in the magic interweb tubes somewhere. Just goes to show that blogging before coffee on a Monday after traveling across the country = bad idea. Sorry for any confusion. 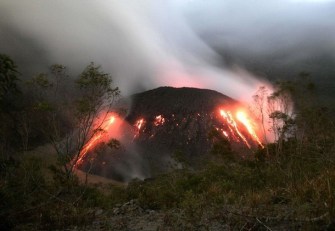 A summit dome at Kelud during the 2007 eruption.

Some apparently believe a local myth, which says that if residents turn off all the lights and speak softly, then the mountain won’t erupt.

This is when it becomes plainly clear that the first step towards proper mitigation for a volcano disaster is educating the public. The 1990 eruption of Kelud was a VEI 4 and lead to evacuations and fatalities.