A lot of volcanoes produce 3-km ash plumes on the regular basis. Right now, there are probably two or three volcanoes in Kamchatka or Indonesia alone that are generating plumes of that size or larger – but those volcanoes are not looming over a population center like Mexico City. That is why every little noise Popocatépetl makes it watched carefully – and makes the news, especially in Latin America, as the Mexico City area has over 20 million people in its metropolitan region. Popo (for short) is about ~55 km from Mexico City and 45 km from Puebla (see map below). It has a history of frequent vulcanian eruptions in the VEI 1-3 range, and one in ~3,700 B.C. that was a VEI 5 eruption that produced pyroclastic flows, lahars and the growth of a new dome. Pyroclastic flows, ash and lahars are the primary hazards from Popocatépetl and it is one of many volcanoes that span the middle of Mexico, including Colima and Paricutin. 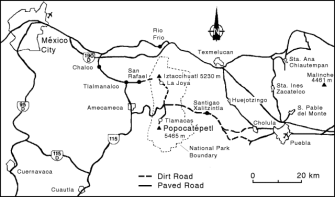 Location of Popocatepetl relative to population centers in central Mexico.

Popocatépetl is always somewhat restless, but today the volcano produced a 3-km ash plume (see top left or below) that was larger than has been observed at the volcano over the last few years. You can watch a brief news report (in spanish) showing some video of the fairly impressive eruption that rapidly waned throughout the day (video). The eruption has prompted Mexican officials to warn people to stay at least 7 km from the summit of the volcano and although National Center for the Prevention of Disasters (CENAPRED) say that the activity is normal, the area around the volcano remains on a “yellow” alert status. Some towns near the volcano reported ash fall and incandescent blocks were seen (spanish) being ejected from the summit crater.

Remember, Popo has a number of webcams set up around it where you can try to watch for continued activity at the volcano.

Find your wallet or keys — or a nuclear submarine.
Up Next
Guest Thinkers

This week, the USDA unveiled a new icon for healthy eating, MyPlate, a successor to the Food Pyramid and MyPyramid.There’s a lot to like about the new visual. The share-of-plate […]