The new eruptive phase at Merapi appears to be getting worse – and from the sound of it, the volcanologists at the Centre for Volcanology and Geological Hazard Mitigation aren’t sure what to expect. Surono, the head of the Centre, described the volcano as entering an “even worse stage” and that “we have no idea what’s happening now.” Those are never good words to hear from the volcanologists on the ground, but shows how unpredictable volcanoes can be. A new dome was noticed on the volcano on Wednesday after the latest large explosion (video), but it is unclear how long it will survive or how much pressure the extruding lava might take from the underlying magma.

The images of the eruption are impressive to say the least (see below). The eruptive plume indicates that there is a lot of pressure in the volcanic conduit and when you combine this with periodic collapses of the dome in the main crater that are producing pyroclastic flows (see below), the combination is about as bad as you can muster with a composite volcano. The ash plume reached over 6 km / 20,000 feet yesterday with noticeable ash fall as far afield from the volcano ash 240 km. The rain on the slopes of the volcano has also remobilized the newly-erupted volcanic tephra (indonesian) to produce lahars down some of the volcano’s drainages. 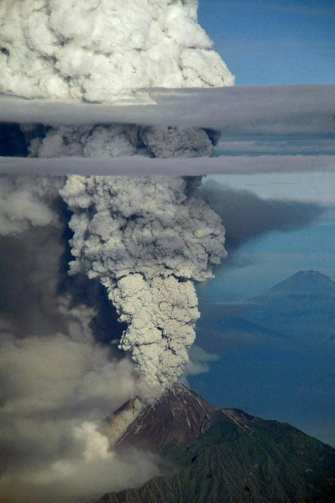 The eruptive plume from Merapi on November 4, 2010.

The ramifications of the eruption are becoming more apparent as well. The refugee shelters for evacuees are being moved to further away from the volcano due to Merapi’s increasing activity. Meanwhile, more airspace over Indonesia is being closed due to the ash hazard presented by the eruptions. The death toll from the eruption has now reached at least 44, although many deaths might have been prevented if people living on the slopes of Merapi heeded the government’s initial warnings. Upwards of 75,000 people have now been evacuated from the extended danger zone around the volcano.

{Special thanks, as usual, to all the Eruptions readers who provided links for this post.}

Top left: The plume from Merapi captured by a nearby aircraft on November 4, 2010.

An independent researcher looks into why there’s such strong opposition to her research.
Up Next
Technology & Innovation

Forbes’ Quentin Hardy says the U.S. economy is on track to collapse in twelve years based on analyses of the diminishing rate of returns from private assets.