I am almost heading out the door of the Colorado Convention Center here in Denver to head back home after an eventful GSA 2010. However, before that I wanted to give a brief update on the activity at Merapi. The eruption continues onward, with the volcano experiencing some of the largest explosions so far observed during this new eruptive period. Indonesia officials are struggling to keep up with the evacuations, which now look to be approaching over 75,000 people leaving the area near Merapi ~ and this includes the new extended danger zone that reaches out 15 km from the volcano’s crater. The BBC has video of the latest events that including the latest explosions that Surono from the Geological Disaster Management and Volcanology Center called “triple” the size of the initial October 26th explosion. The images of the volcano taken on Tuesday (top left) seem to indicate that the volcano is responding to lava forming domes at the summit crater, with periodic explosions that destroy whatever dome has been built. This behavior is fairly common for a volcano like Merapi, especially if the magma is especially volatile-rich, promoting periodic explosions. 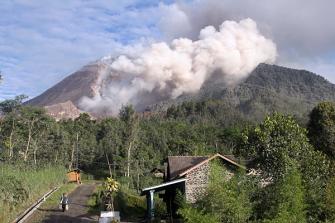 Merapi producing a pyroclastic flow and ash on November 2, 2010.

And to pile on to the geologic events in Indonesia, Anak Krakatau is also becoming more active, with ash explosions producing plumes that reach 1.7 km / ~5,200 feet. There are also reports of “toxic gas” being released from the volcano, but the details are scarce so I’m not sure if it is mainly carbon dioxide that is the concern or something else like sulfur dioxide. James Reynolds has posted some video on the explosive activity at Anak Krakatau on November 1, so check that out. Eruptions like these that produce moderate-to-small ash plumes are not uncommon at Anak Krakatau, so no need to be overly concerned with this activity, but as the saying goes, at least for Indonesia, when it rains, it pours.

More updates as news merits, but again, keep up with the great info and discussion in the comments.

Top left: A nighttime image of Merapi erupting on November 2, 2010.

The Nationalization of Congressional Elections

“Wave elections” may be becoming more common because of the intense political polarization that has emerged.