For decades, Mars has been the focus of intense interest and here are some of those updates that have recently transpired.

NASA is preparing to launch its latest Mars probe, Curiosity (or the Mars Science Laboratory) sometime after Thanksgiving. It is loaded with the latest scientific equipment, and may help to solve some of the mysteries concerning the red planet. Every two years, NASA has a small “window of opportunity” to shoot a space probe to Mars and the upcoming launch just so happens to coincide with that window. That launch window is between November 25th and December 18th, 2011 with the actual launch taking place on Nov. 25, 2011 at 7:21 a.m. PST (10:21 a.m. EST). 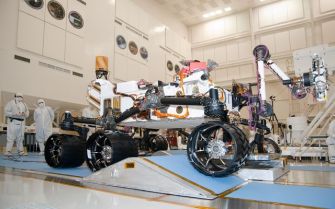 Below is an archived webcast of NASA scientists and engineers building the Curiosity Rover that was recorded directly from the clean room at NASA’s Jet Propulsion Laboratory. The LIVE Curiosity Cam will be back up and running sometime within the next month or so.

Some additional facts about the new Curiosity Rover are as follows:

Additional Fact Sheets are as Follows:

Curiosity will join the much smaller Mars Exploration Rover Opportunity (MES) which has been setting records left and right. The rover mission was supposed to last 3 months, but instead has been working furiously since 2004. In its latest journey, which took 3 years, it climbed up the Endeavor crater which is about 14 miles across. This rover can almost be compared to the Everyready bunny rabbit that just keeps on going and going. Its new mission is to examine the clay in the crater, since that clay may be remnants of an ancient lake in that crater. These gigantic craters in many ways are like time machines, since they are billions of years old and reveal ancient underground layers of rock.

Sadly, Opportunities twin, the Spirit rover, became stuck in an area of soft soil and couldn’t quite break free in late 2009. Spirit’s last communication with Earth was sent on March 22, 2010 and now the rover will remain stuck and will slowly be deteriorated by the windy and rough elements of the planet. The Spirit rover however will go down in history as taking the first and highest resolution image taken from the surface of another planet. The image below (a small portion) originally had a full size resolution of 4,000 by 3,000 pixels, which isn’t much higher than an 8M digital camera found on most phones and takes photos with a resolution of around 3,264 x 1,952 pixels. Since this very first image was snapped, the Spirit cameras have been quite trigger happy and NASA has provided a gallery of those 128,224 Raw Images and can be viewed here. 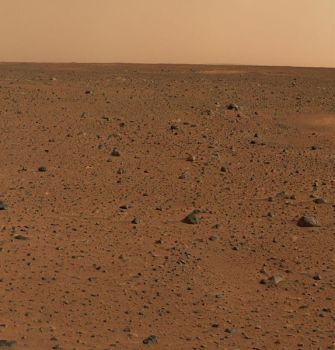 Another update about the red planet seems to be puzzling planetary scientists and is the recent discovery of streaks found at the rim of large craters on Mars, which may represent the flow of liquid water. These streaks were photographed by orbiting space craft and can be seen in the image below. This assumption that these streaks directly represent that of liquid water although they are still controversial. We know that salt water freezes at a lower temperature than ordinary water, so it is conceivable that even on the frozen surface of Mars, liquid water (in the form of salt water or brine) may flow freely during some months of the year. But this is still speculation although not being dismissed by any means. For the most part, Mars is a frozen desert so any forms of life, probably microbial, might be found underground, perhaps living in hot springs under the surface. Only time and further examination will provide us the facts that we are looking for.

For quite some time, there has been talk about the possibility for a manned mission to the red planet and Hollywood has always provided us glorified versions of that. This possibility gained quite a bit more traction in the news when President Obama recently insisted that NASA needed to focus on new frontiers and leap into the future.

It wasn’t long ago that President Obama called on NASA scientists and engineers to launch a manned mission to Mars within three decades. President Obama made several remarks on the subject including “By the mid-2030’s, I believe we can send humans to orbit Mars and return them safely to Earth with a landing on Mars to shortly follow.” He also stated that “We’re still using the same models for space travel that we used with the Apollo program 30, 40 years ago. And so what we’ve said is, rather than keep on doing the same thing, let’s invest in basic research around new technologies that can get us places faster, allow human space flight to last longer.” Many people stated that those very remarks were quite reminiscent to the 1962 speech at Rice Stadium by President Kennedy in ’62 when he stated “I believe that this nation should commit itself to achieving the goal, before this decade is out, of landing a man on the Moon and returning him safely to Earth.”

President Obama’s plans for such a mission are far from new as he mentioned all of this last year when he stated that humans would most likely set foot on an asteroid just prior to the long-dreamed-of expedition to Mars.

The very earliest date for a possible manned mission to Mars is 2035, but that of course depends on many factors (economical, political & technological). At present, there is talk of building a new booster rocket capable of going to Mars, but at the moment there are no funds or concrete plans for such a booster. Until then, it appears that everything is on hold and may be for quite some time. Even if a manned Mars mission is approved, it might only reach the moons of Mars (making a return trip back to Earth more feasible). But with all of the recent budget cuts combined with a bad economy, there certainly isn’t much progress in this direction not to mention that a manned mission to Mars isn’t likely to be at the top of the list.

How Vincenzo Peruggia Created the Mona Lisa—by Stealing Her

He made more money as a handyman than as an artist, but Vincenzo Peruggia’s personally responsible for making the Mona Lisa what it is today. Leonardo da Vinci painted Lisa […]