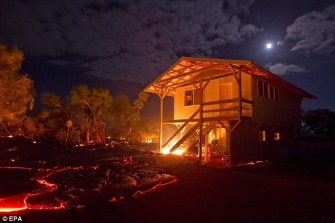 Lava flows from Kilauea in Hawai`i move towards a home in Kalapana.

Whenever I think about the hazards posed by most lava flows, I tend to think about the opening scene in the Hitchhiker’s Guide to the Galaxy. Developers are planning to knock our hero Arthur Dent’s house down and as a last ditch effort to stop its destruction, Arthur lies down in front of the bulldozer. The demolition supervisor, a certain Mr. Prosser, at one point asks Arthur if he knows how much damage the bulldozer might suffer if he just lets it roll over poor Mr. Dent. Arthur says he doesn’t know and Mr. Prosser replies “none at all.”

That is, in a nutshell, the hazard of lava flows. They can take out almost anything in their path, but really, you need to pull an Arthur Dent in most cases to put your life at risk*. Lava with low silica like a basalt will usually flow in one of two styles: runny pahoehoe and rubbly a’a. Whether you get pahoehoe or a’a is controlled by a number of factors including temperature of the lava, crystallinity, gas content, slope of the land surface (along with some other more minor factors), but even in its runny form (video), the pahoehoe, lava flows usually don’t move too quickly – kilometers per hour at the fastest, more like meters to hundreds of meters per hour – and you can comfortably get out of the way. When they can become hazardous is when they are allowed to stay hot, either by traveling through a lava tube system underground (rock is a great thermal insulator) or by storing the lava in a lava lake and catastrophically releasing it (*such as what happened at Nyiragongo in 1977, killing over 1,000 people).

However, most of the time, lava flows are just destructive to property and plant life – slowly rumbling across the landscape like Mr. Prosser’s bulldozer. A’a lava flows move like giant tank treads (video), with the main body of the flow overrunning the cooling nose, pushing that material underneath the lava flow. You can get lava flows of more silicic compositions, such as an andesite or rhyodacite, that have flow fronts that are tens to hundred meters tall, so if you can imagine a wall of hot rock 50 meters tall rumbling towards your home at a few meters a day, well, that is what some lava flows hazards are like. In Hawai`i, the pahoehoe and a’a lavas can easily inundate homes and infrastructure – as has been happening this week in the Kalapana subdivision on the slopes of Kilauea. There is little that can be done if a large lava flow heads into town – just hope that the flows misses your home so you can salvage what is left. If not, the lava flow will likely slowly engulf the home, crushing it and burning the remains.

So, not much can be done to stop a lava flow. There were attempts in the 1930-40s to bomb lava flows in Hawai`i to divert them or stop the flow, but that was, not surprisingly, unsuccessful. In very rare cases, lava flows have been diverted by setting up barriers, such as was done around Etna in Italy, or by pumping millions of liters of seawater on the lava flow to cool the flow front and change the direction of flow like was successfully done at Heimay in Iceland. However, beyond this, lava flows can be one of the most costly volcanic hazards in terms of property damage – not only will they destroy your home, but it will be buried and capped by hardened lava, so even soils take decades to recover. Yet, people still choose to build their homes on the slopes of Kilauea, knowing full well that the land they build on was once an active lava flow and more likely than not, these lava will return again to add to the Big Island.

Time for your weekly dose of volcano mystery!