I had a fun time last night speaking to the Licking County Rock and Mineral Club – lots of talk about volcanoes and we spent some time talking about our newest best friend, Kirishima. The impressively-erupting Japanese volcano (see below) has finally made it into the english-speaking media but not in the way I expected. No, many of the articles I saw were referring to the eruption as from the “James Bond” volcano, which at first elicited a “huh?” from me but then realized that yes, indeed, Shimnoe-dake cone was a model for the evil lair of the villain from “You Only Live Twice”. Leave it to the news to think that a tie-in to the Bond film is the interesting angle for this event. (Sigh … well double sigh for the articles that call it “smoke” coming out of the vent.) 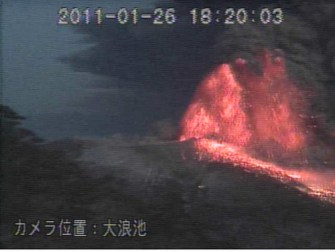 The volcano is still erupting, producing a significant plume – you can check it out on the Kirishima webcam from the JMA (seventh volcano from the bottom on the right-hand menu). We also have on-the-ground reports from intrepid Eruptions reader and volcano-chaser James Reynolds who is headed to the volcano to see the action firsthand. He reports a lot of ash fall in the southern region of Kyushu. Sei Iijima of Japanese Meteorological Agency, the body that monitors volcano activity, says that this eruption is not a danger to any cities in the region (beyond the nuisance of ash) and that the seismicity at the volcano suggests that no larger event is on the way, however, the eruption as it is may continue. The JMA is characterizing this as a “small eruption” of the volcano and the current alert status prevents people from going within 2 km of the volcano. In fact, no evacuations have even been issued due to this eruption (although some people left on their own). Most of the problems caused by the eruption have been disruptions to air, train and road traffic in and around the area around Kirishima on Kyushu. The plume from the volcano shows up as a small puff on the IR satellite loop for the region as well as the ash continues to cause a VAAC advisory for up to 7.5 km / 25,000 feet. You can an even get an ideal of the sulfur dioxide released in the eruption from this GOME-2 image over the Pacific Ocean (see below) taken earlier today.

Sulfur dioxide plume on January 27, 2011 from Kirishima drifting east over the Pacific Ocean.

There is still lots of great video of the eruption from yesterday and today, including timelapses of the events from two webcams. So far, this eruption is another ideal volcanophile event where life/property seem to be fairly safe, but there are still lots of eyes trained on the volcano to see all the events unfold. I will update with any news from this eruption as it happens today.

{Special thanks to all the Eruptions readers who provided links and images for this post.}

Top left: A January 27, 2011 webcam capture of the eruption at Kirishima. Click on the image to see a larger version.

Study: A Complete Stranger Understands You About as Well as Your Spouse Does

If you say “it’s snowing hard out there,” are you annoyed if no one gets up to shovel the walkway?