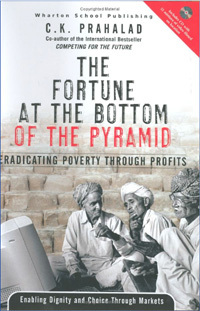 Being able to tap into the innovation occurring at the Bottom of the Pyramid was one of the themes of C.K. Prahalad’s breakthrough book in 2004, as he explored ways that people in low-income, resource-poor places like India are generating fascinating new innovations in unexpected ways. This is an important notion – that resource constraints in emerging market nations can actually make people more innovative rather than less innovative. I’ve been keeping my eyes on stories that tie in to this theme. Mostly, I’ve seen articles about marketing to the bottom of the pyramid, but not much about the actual process of innovation occurring at the grassroots.

That might change, though, as more people become aware of life at the bottom of the pyramid. This week, two articles really caught my eye. On Wednesday, the New York Times reported on a unique tourist attraction located three hours northwest of Mexico City that allows visitors to re-enact an (illegal) crossing of the Texas-Mexico border. Then, on Thursday, Yahoo! News reported that Brazilian shanty towns (of the kind seen in City of God) are becoming “exciting, interesting and romantic” for foreign tourists. One tour operator likens these rough-and-tumble neighborhoods to a sort of Disney World for bored, middle-class Westerners:

weapons that sometimes include grenades, bazookas, and even anti-tank

missiles. Much of the daily bloodshed that has made Brazil the second

most violent country in the world, according to UNESCO, takes place there. With basic amenities like sanitation, running water, roads, lighting and policing often absent, few dare venture in.

Yet it is precisely those qualities that attract foreigners, says

Hermano Vianna, the author of several books about the relationship

between favelas and Brazilian music. Compared with ordinary, and

orderly, middle-class lifestyles in Western Europe and the United

States, life in a favela is seen as unpredictable, romantic, and very

cool. “People come here to get away from the boredom of their own

countries,” Mr. Vianna says. “They are looking for cultural

The next step, I suppose, is for companies like P&G, Coca-Cola and Pepsico to run regular consumer research projects in these favelas. As the article points out, a number of nascent trends in fashion, art, music and film all have their roots in the Brazilian favelas.