Imagine just for a moment; a floating, orbiting and operational laboratory holding several crew members at any given time, weighing over 900,000 lbs.  It’s over 350 feet wide, with solar panels spanning more than half an acre—as long as a football field (with the end-zones)—and it’s screaming through the Earth’s orbit at over 17,000 mph, circling the globe every 90 minutes for a decade.

Yesterday marked the ten-year milestone for the human habitation of space; thanks to the International Space Station. Over the years, billions of dollars in equipment and material have been flown to the station; expanding its size, efficiency, living quarters and ability to conduct various scientifc experiments. The United States’ participation alone has been estimated to have cost almost $100 billion; Russia has sent up various modules and equipment of its own; and other countries like Canada have built the commonly seen mobile robot arm extension.

The past decade has allowed the orbiting research laboratory to conduct experiments in a wide range of fields including and exploration of the long-term effects of space on the human system, medicine, biology, chemistry, physics and even astronomical observations. Since it’s inception, the space station has been expanding and it will continue to grow as long as there is funding.

Yet another addition to the station will come in the first months of 2011, with the installation of the Alpha Magnetic Spectrometer-02 (image below) which is designed to research and detect dark matter. After that; who knows? Once fully completed, the International Space Station is expected to be visible by it least 90% of the world’s population. I guess we can only hope that as 2011 rolls into 2020, we really start to see some interesting advancements and/or discoveries rain out of the ISS; allowing us to further our reach into space. 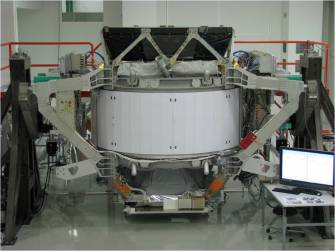 I am almost heading out the door of the Colorado Convention Center here in Denver to head back home after an eventful GSA 2010. However, before that I wanted to […]