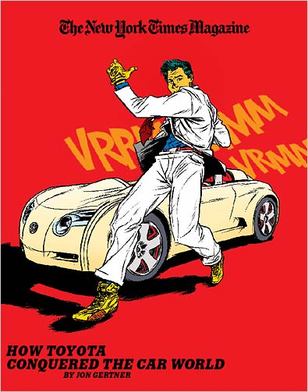 This weekend’s New York Times Magazine featured a great cover story on Toyota, which explained how the Japanese company has become the acknowledged leader in the global automobile industry. At a time when Ford and GM are downsizing and rightsizing, the incredible Toyota engineering team continues to get things right. The latest product is the Toyota Tundra, a new full-size truck designed with Red State America in mind. With Toyota, small incremental innovations snowball over time into huge improvements in productivity, efficiency and output. By the end of 2007, Toyota could pass GM as the world’s largest car company. Already, the company’s stock market capitalization is $240 billion – higher than that of GM, Ford, Daimler Chrysler, Honda and Nissan combined. If Toyota were a baseball team, surmises Jon Gertner of the New York Times, it would be the type of team that wins 150 out of 162 games.

Anyway, if you’re looking for some Japanese management buzzwords to inject into your cocktail conversations, the article explains concepts like kaizen (“continuous improvement”) and genchi genbutsu (“what customers want in a car or truck and how any current versions come up short”). What’s cool is that Toyota engineering and design teams actually make archaeological visits to truck graveyards in Michigan, where they examine the rusting hulks of old trucks: “With so many retired trucks in one place, they also gained a better sense of how trucks had evolved over the past 30 years – becoming larger, more various, more luxurious – and where they might go next.” (In addition to this great quote about evolution, the article highlights the importance of Toyota’s DNA — both topics, of course, that relate directly to the Endless Innovation blog!)