Blogger David Xia friend swiped this card from Citibank while he was there for an interview. It’s a list of tips for women on how not to sabotage their careers with Citibank. The friend says the cards were on every desk in the HR department.

My favorite is item #8 on the list of things NOT to do if you want to succeed at Citibank:

Play Fair: Women tend to be more naive. A woman might assume that the rules have to be obeyed whereas a man will figure out a way to stretch the rules and not be punished.

Other major don’ts at Citibank: asking permission, and apologizing. Those are strictly for pussies, broke pussies. I bet they hired the guy who swiped that card just because he swiped it. Kleptos have a bright future with Citibank.

As Zach Carter reported for AlterNet last month, it is unlikely that any Citibank executives will face any significant consequences for misleading shareholders about $40 billion in subprime debt. 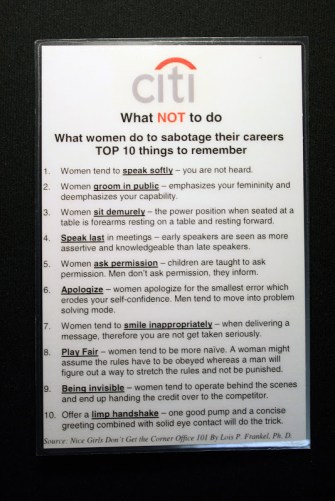 Does God Talk + Theory of Everything + Self Promotion = Best-Seller?

Stephen Hawking’s latest book Grand Design sits atop the Amazon best-seller list and has been the subject of gobal news attention and debate.  Driving discussion (and sales) is Hawking’s “no […]