900 million people worldwide live without safe drinking water according to WHO and UNICEF. In most of these areas it is the women and the kids who have to walk for miles each day carrying heavy jugs and missing school and work opportunities. One of the solutions to this problem could be fog-harvesting.

Fog harvesters are systems that collect water particles from the air with the help of a fence-like mesh panel and then move them to connected receptacles. A good fog-harvesting device has a combination of surfaces that both attract and repel water. This is exactly the area Shreerang Chhatre’s MIT training has been focused on – the wettability of materials – or their ability to absorb or repel liquids. 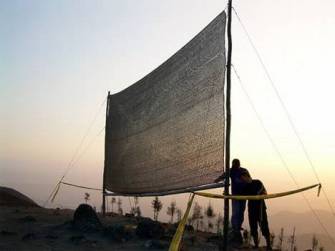 Even though the concept of fog-harvesting is more than 20 years old and similar devices are already in use in Chile, Peru, Ecuador and other countries, Chhatre believes that he has found a way to improve the efficacy of the materials, according to MIT News.

Usually, fog harvesters are used in coastal areas where the wind moves water vapor inland. Chhatre wants to make the devices efficient in arid climates and high-altitude areas as well. He and his colleagues are conducting laboratory tests to improve the water collection ability of existing meshes. In some field tests, fog harvesters have captured one liter of water per one square meter of mesh, per day.

As with other solutions targeted at the developing world, the problem with the affordability of the technology remains. But the technology could also be used by businesses and communities in the developed countries to reduce energy costs for obtaining and transporting water. Eventually, this could drive the price down. As of now, however, there is plenty of room for development in fog harvesting technologies and their commercial application.

Do You Care About Phone Location Tracking?

Wired—which says you should care about the controversy over iPhones and Android smartphones tracking users’ location—reports on legal action by two Apple customers.