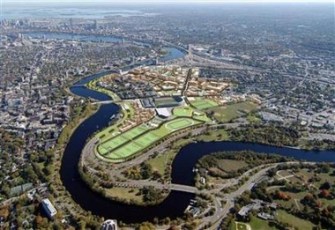 There’s a reason why Harvard continues to dominate institutional rankings. While some universities spend $100s of millions of dollars on their athletic programs and athletic facilities, Harvard sinks its $30 billion endowment into a 250 acre life sciences campus. From the news wires:

CAMBRIDGE, Massachusetts (Reuters) – Harvard University unveiled plans on Thursday for a multibillion-dollar campus expansion that aims to turn America’s oldest university into one of the world’s top hubs for stem-cell research and other life sciences. The plan, years in the making, will give a radical new look to Harvard’s campus over the next 50 years in the most ambitious expansion in the school’s 371-year history….

…Dubbed the Allston Initiative, the plan would turn industrial land now used as parking lots and truck and rail yards into an urban center with stores, tree-lined streets, bike paths and access to the Charles River, a popular destination for students and tourists….

…During the first 20 years of the expansion, Harvard would build 4 million to 5 million square feet of buildings and create at least 5,000 jobs, university officials said. Construction in Allston could begin this summer when Harvard hopes to break ground on a 500,000-square-foot (46,450-square-metre) science complex that will house the school’s stem-cell researchers and other institutes. The science complex, university officials said, would be the nucleus for new interdisciplinary research and is expected to go a long way toward boosting Boston’s economy by encouraging partnerships with biotechnology firms that may displace the region’s long-fading manufacturing base.