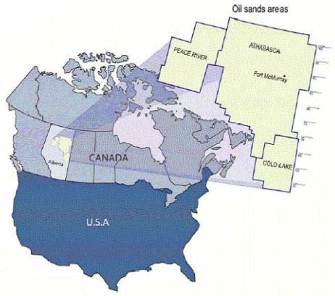 Faced with an unflattering image as a global environmental disaster area, the oil sands sector is stepping up its offensive to counteract critics. The sector has re-branded the Oil Sands Developers Group, a Fort McMurraybased coalition of 28 companies developing the business, and put forward its president, Don Thompson, to get out the message that reality on the ground is different from that portrayed by green groups and others who want development stopped…

…Negative perceptions of the oil sands as a big engine of global warming have resulted in a series of U. S. policies to discourage their use. That, too, has been blown out of proportion, Mr. Thompson said. The oil sands account for 4% of Canada’s greenhouse gas emissions, while Canada’s emissions are 2% of the world’s total. “We have not been communicating enough with our key public,” he acknowledged. “That is something that we want to change. We want to reengage and understand all the issues that people have with the oil sands  and we want to make changes where they are required to ensure we have dealt with issues.”

According to the article, main points of emphasis in the campaign will include:

The air quality in Fort McMurray is as good as anywhere in Alberta – Oil sands companies employ 1,500 aboriginals and have awarded aboriginal enterprises $2-billion in contracts – The oil sands account for only 4% of Canada’s greenhouse gas emissions – Oil sands mining operations affect 0.01% of the boreal forest – Projects to improve roads and bridges worth $600-million are under way right now in Fort McMurray – Two new subdivisions, each with the potential to house 20,000 people, are under construction.

Sizzle? Call for Papers on Documentary Film and Its Impacts

Director Randy Olson’s Sizzle: A Global Warming Comedy has already shaped the agenda and framed the discussion among scientists and the science media, a key impact of a successful documentary […]