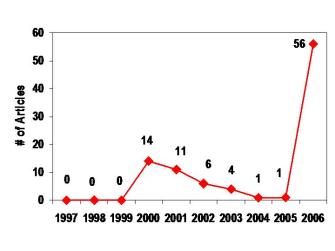 All eyes in the science advocacy community will be on Paris tomorrow, as the policymakers’ summary of the Intergovernmental Panel on Climate Change (IPCC) is released. Though the most important scientific document on global warming, it remains unclear just how much media and public focus the report will generate.

Earlier this week, celebrities launched Global Cool, a sleek new multimedia campaign to generate attention to global warming among the sizable majority of Americans who tune out almost all coverage of public affairs. As backwards as it might seem, more Americans this week will be exposed to buzz about GlobalCool then they will be about the IPCC report.

Just how influential can “entertainment education” be in breaking through to non-traditional audiences for public affairs content? Consider the graph above tracing attention at the major newspapers of conflict or “blood” diamonds. Though the major events and international agreements on the issue all took place back in the late 1990s to early 00’s, the issue barely scratched the newspaper agenda. It was only with the release of Leonardo DiCaprio’s academy award nominated “Blood Diamond” that the issue made it into wider media focus, creating a justifiably embarrassing PR problem for the diamond industry.