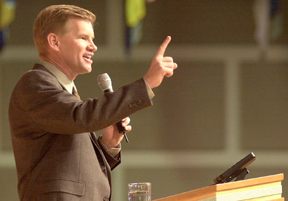 Overlooked in the Ted Haggard scandal is that the former head of the National Association of Evangelicals was also one of the leaders of the “creation stewardship” movement, framing the issue of global warming in terms of moral duty.

Polls show that Republicans are far less concerned with global warming than their Democratic counterparts, and framing the “old” issue of global warming in a new way around moral duty is a very viable strategy for engaging the Republican base, showing Evangelicals why the complex and “uncertain” topic was personally relevant. (See this post from Spring 2006.)

Newsbusters, (a conservative “media watch dog” site,) has an otherwise useful roundup and links to the many news articles that feature Haggard delivering his “moral duty” frame.