Well, when it rains, it pours. We’ve gone from some rather sparse Smithsonian/USGS Global Volcanism Program Weekly Volcanic Activity Reports to a quite busy one. So, in an attempt to catch up with a lot of this activity, I thought I’d try to combine this week’s report with a pile of other links to news, images and more that I’ve been trying to squeeze in over the last week.

Special thanks, as always, to Sally Kuhn Sennert for putting together the Report!

Highlights this week (not including Telica, Aso, Etna and Bulusan):

Ecuador: I’ve been behind in following what has been going on at Tungurahua, where the volcano appears to be in the midst of a longer period of large explosive eruptions. Local media in Ecuador are reporting “cracks” on the side of the volcano, about 1000 meters below the summit, where volcanic gases are escaping (see image below). The Instituto Geofisico noted that the renewed ash emissions seen on May 17 (after 10 days of relative quiet), combined with the observation of the fumaroles on the side of the volcano, all suggest that magma is continuing to rise into the edifice, so a close eye should be kept on Tungurahua for more explosive eruptions.

New fumaroles observed on the slopes of Tungurahua. Image courtesy of the Instituto Geofisico de Ecuador.

Russia: It is always busy in Kamchatka, but what I wanted to point out was a number of nice images from the NASA Earth Observatory of volcanoes – both active and quiescent – on the Far Eastern Russian peninsula. The first image shows the thin, grey plume from Karymsky drifting out to the east over the Pacific Ocean – the volcano has been consistently producing plumes that reach 3-6 km over the volcano. There was also an image of Avachinsky peaking up through a cloud layer, showing the cone of the volcano growing in the crater from a debris avalanche. The volcano is built on the edge of another large Kamchatkan volcano, Kozelsky. Avachinsky last erupted in 2001 while Kozelsky has no known historical eruptions.

Alaska: The presence of Katmai in any GVP Report has got to give anyway pause, but luckily the only mention was the remobilization by winds of ash from the 1912 eruption. Next year marks the 100th anniversary of one of the largest eruptions in human record, creating one of my favorite geographic features, the “Valley of 10,000 Smokes” (top left). The valley got its name from the degassing of the large ignimbrite that was deposited by the eruption, some hot enough to allow cooking on the fumaroles (see below) in the years after the event. 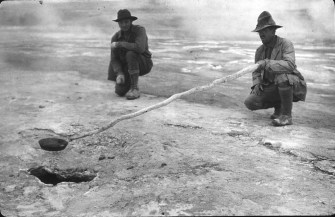 Two gentlemen cooking on the fumaroles within the Valley of 10,000 Smokes, Alaska in 1915. Click here to see source.

Top left: The Valley of 10,000 Smokes, showing the extensive erosion through the ignimbrite deposited in the 1912 eruption of Katmai, Alaska. Click here to see original.

Students are more than a Test Score

That is the premise of Zinch. Zinch connects students to schools and scholarships which in itself is of course not that revolutionary. But other than just delivering the obligatory test […]